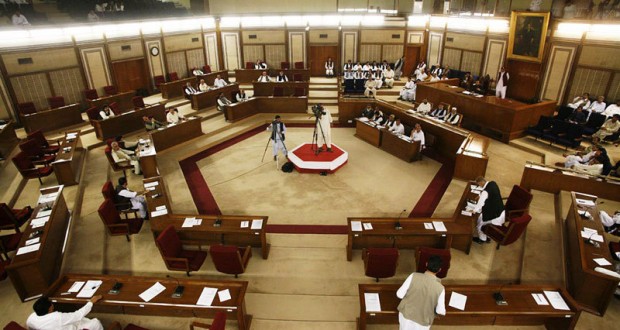 Session of Balochistan assembly was convened by governor Balochistan, Mohammad Khan Achakzai, to discuss the political situation in the country.

Senior minister and president of PML-N Balochistan chapter, Sanaullah Zehri, tabled the resolution which was supported by PML-N, Pashtunkhaw Milli Awami party, National Party, JUI-F and ANP. Even PML-Q, who is part of Inqilab march, supported this resolution.

Speeches were made by different members of Balochistan Assembly against Imran Khan and Tahir ul Qadri.

Abdul Karim Nosherwani of PML-Q said that “Our central leadership is dancing to tunes of others.”

Shahida Rauf, member of JUI-F, demanded that “The government must bar the entry of Imran Khan to Balochistan,”

There is no representation of PTI or PAT in Balochistan assembly so there was no one to defend both parties in the assembly. The ongoing political turmoil in Islamabad and Central Punjab has least affected Balochistan because of lack of strength of Imran Khan’s and Tahir ul Qadri’s party in Balochistan.

Published in The Balochistan Point on August 18, 2014.