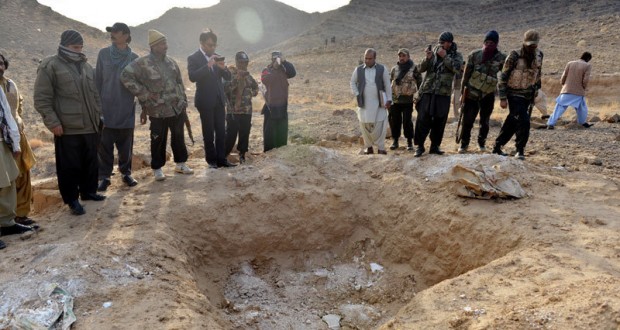 Quetta: Khuzdar mass graves commission report has been released and it has ruled out the involvement of security forces in this matter. The report was released by government of Balochistan on Tuesday.

Earlier, in January 2014 a mass grave was discovered in Tootak area of Khuzdar. According to the claims of Home and Tribal Affairs department of Balochistan, 17 bodies were retrieved from the Mass graves. Asian Human rights commission quoted the number of retrieved bodies to be over 100.

Chief Minister Dr Malik Baloch had established a judicial commission headed by Justice Noor Muhammad Maskanzai of the Balochistan High Court to conduct an inquiry into the mass graves in the Totak area of Khuzdar district.

The commission termed the mass graves a negligence of civil administration and mentioned that its responsibility of the administration to protect the lives and property of people.

Voice for Baloch Missing Persons (VBMP) has termed the mass graves commission report an attempt to hide the identity of the real perpetrators of the gruesome act.

The mass graves were discovered in Khuzdar district of Balochistan which is one of the most troubled districts in Balochistan. Target killings, kidnappings, bomb blasts and rocket attacks are normal occurrences in Khuzdar.

Published in The Balochistan Point on August 19, 2014.