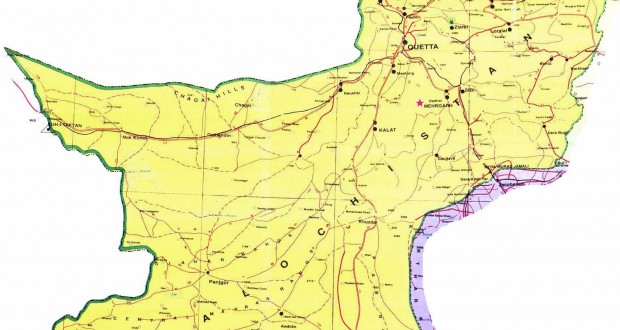 Balochistan from British raj to Pakistan

The British ruled over Balochistan for almost a century. They used different diplomatic policies in order to control the area under their Raj. Balochistan proved to be very important for the British government due to its strategic worth. The prime objective of British presence in Balochistan was to guard the frontiers and if there was any real or perceived danger to these frontiers, it was to be suppressed. They used Balochistan as a buffer zone as well as safe haven pad in order to counter the foreign incursions from Western side. The region was subjugated very easily through the diplomatic policy of divide and rule.

Robert Sandeman policies basically gave a safe passage to British advancement in Balochistan. His polices are called the Sandeminzation. In fact, it recommended the British Empire’s Westward advancement across the river Indus. It resulted in a strong British influence in the region in the shape of the Raj. In order to pursue their imperial policy as well as to control the traditional tribal system in Balochistan, the Sandeman system however had divided the Balochistan territories into four political divisions: the British Balochistan, the Leased Areas, the State Territories and Tribal Balochistan. Therefore, later policies were implemented in specific divisions as per the Raj’s requirement. The British did not make Balochistan a full-fledged province till the very end of their rule. They kept the people of Balochistan an backward. They never ever used military force for suppression of resistance against them. As matter of fact, they strengthened those very institutions which were felt primitive as well as those which were important for the implementation of their policies. These include the jirga System and Sardari System and title awarding system etcetera. Through these tactics British government had been getting more support especially from the Sardars and Khans.

After the end of Colonial Raj from Indian subcontinent, Balochistan acceded to Pakistan in 1948. Balochistan was like a new born baby in Pakistan’s hands but unfortunately they did not nourish it as per the requirement. That later on resulted in the long lasting resistance against the State interests. The apathy of State as well as the poor leadership has made Balochistan turbulent province. The current situation is actually the result of sixty-five years of ignorance and improper planning of the center towards Balochistan. The provincial governments and traditional tribal leaders loyal to the center are also responsible for the plight of Balochistan.

Those who do not draw lesson from history they inevitably have to repeat history. So what history teaches us is simply a realization of the fact. The center has to regain the lost confidence of tribal leaders to have complete access in their areas of culture. The central government in collaboration with provincial authorities should make composite educational policy with maximum applicability and result orientation. The center should promote the education and health in Balochistan by support of the tribal leaders. The government has to take them in confidence so that in future, the new generation may indispensably crush the traditional Sardari System. In fact it can bring peace and development to Balochistan.

It can be concluded that a literate and financially stable Balochistan guarantees the integrity and solidarity of Pakistan. The fate of Balochistan can only change when the federal government is really sincere in changing it. In fact it is possible through good governance, harmony and patriotic way of administration. Hopefully an educated and well off Balochistan of future will get rid of target killing, sectarianism, separatism and foreign incursion in Balochistan.

The author holds a M.Phil degree in History from Quaid-i-Azam University, Islamabad.

Published in The Balochistan Point on July 27th, 2014.

Disclaimer: Views expressed in this article belong to the author and The Balochistan Point not necessarily agrees with them