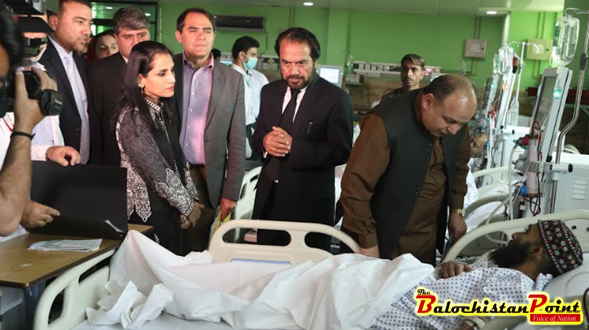 QUETTA: state-of-the-art kidney centre has been opened in Balochistan to provide free treatment to Pakistanis and Afghan refugee patients suffering from kidney disease.

The project was jointly delivered by Balochistan’s health department, the Balochistan Institute of Nephro-Urology Quetta, the UN refugee agency (UNHCR) will cater for the needs of over 14,000 Pakistani citizens and Afghan refugees with renal diseases every year.

The project has been implemented under the Refugee Affected and Hosting Areas (RAHA) initiative – a platform for improving access to quality services for both Afghan refugees and their host communities.

Under the agreement, the provincial government has provided dialysis machines and trained staff while UNHCR has constructed a building to house the dialysis unit, installed an elevator and centralised the oxygen and air-conditioner systems, as well as provided 15-modern hospital beds.

The facility is unique in the province and currently treats sixty patients suffering from renal diseases every day. With the new dialysis unit, an average of forty-five additional patients who require haemodialysis will be treated free-of-cost each day. It currently costs Rs. 6,000 (USD 50) per patient, per session. All chronic patients need dialysis between two and three-times-a-week.

UNHCR representative for Pakistan, Ms. Ruvendrini Menikdiwela said: “the upgrading of the Balochistan Institute of Nephro-Urology in Quetta will have a real impact and enable the host community and Afghan refugees to have access to modern health facilities. UNHCR has helped implement a project that improves the quality of people’s lives,” she said.

The Chief Justice of the High Court of Balochistan, Justice Mir Muhammad Noor Meskanzai, appreciated UNHCR’s support to refugee hosting communities in the province. He said renal diseases are on the rise and such projects help tackle the crisis. He called upon the international community to continue to provide support to Afghan refugees until they are able to return to their country.

Since its launch in 2009, the RAHA programme has provided assistance to over 10.6 million people through 4,100 projects worth USD 200 million in Pakistan in the sectors of education, health, livelihood, water, sanitation, infrastructure and social protection. Pakistan continues to host 1.4 million Afghan refugees. Around 4.3 million Afghans have returned to Afghanistan under the UNHCR-facilitated voluntary repatriation programme since 2002.