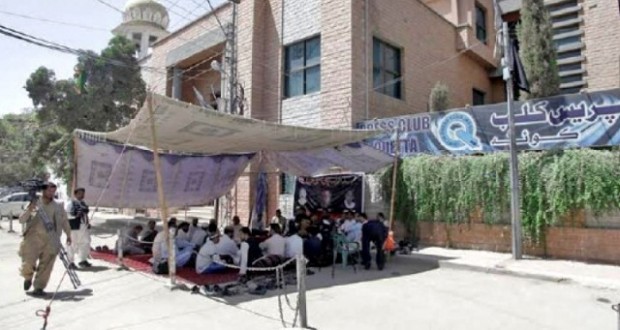 Quetta: Press clubs across Balochistan remained closed on Monday as journalists protested what they described as law enforcement agencies ‘inability’ to find the murderers of journalist Irshad Mastoi and two of his colleagues, who were gunned down in their office on August 28. The strike was called by Pakistan Union of Journalists (PFUJ) and Pakistan Press Clubs Council.

“We have lost more than 40 journalists in the line of duty and a majority of them were targeted because of their work,” said Saleem Shahid, Vice President Pakistan Federal Union of Journalists (PFUJ). “It is ironic that not a single murder case was thoroughly investigated nor any criminal brought to justice by the police or any investigative agency to date.”

Irshad Mastoi, reporter Abdul Rasul and an accountant of a news distribution agency were gunned down last month. Police and law enforcing agencies say they have no leads on the killings. The BUJ demanded that the government provide financial compensation to the families of those killed. “The closure of the press clubs is a clear message that the government and its agencies should fulfill their constitutional responsibilities,” Shahid said.

President Balochistan Union of Journalists (BUJ) Irfan Saeed said journalists will observe a hunger strike if there is no progress in the investigation into Mastoi’s murder. “This is a serious issue and we will not give up until the culprits are arrested,” Irfan Saeed told The Express Tribune.

President Quetta Press Club Raza Ur Rehman said the recent killings have sent a shockwave among journalists in the city, who now working under immense pressure. “This culture of impunity should end now. Law enforcers should expedite the investigation and trace the culprits. We will not tolerate any negligence on the part of the law enforcing agencies,” he said

Republished in The Balochistan Point on 9th September, 2014.