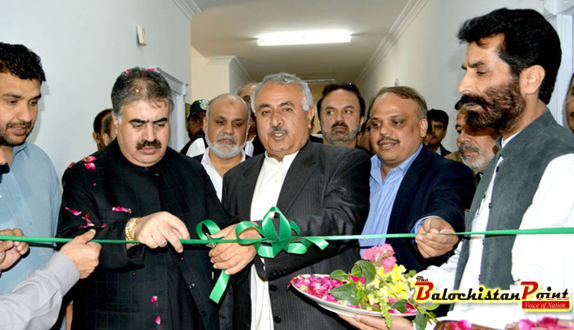 Speaking on the occasion, Chief Minister said that the main purpose of establishing Public Complaint Cell is to get information about the issues and difficulties faced by masses and their timely resolution.

“The in-charge and other personnel of complaint cell should work diligently and sincerity so as the goals of establishing this cell could be achieved and the people could be given relief,” Chief Minister directed.

It may be mentioned here that on the special directives of Chief Minister Balochistan complaint cells has been established that   receives public complaints and will immediately produce them to Chief Minister on daily basis.

Public complaints like absenteeism of teachers, situation of cleanliness in areas, absenteeism of doctors and dispensers in hospitals, corrupt officers or their inappropriate attitude and other personnel, hurdles in lodging of FIR in police and Levies stations or unnecessary delay related complaints could be provided with written evidences, which would be addressed on immediate basis.

Chief Minister has authorized local body’s representatives to monitor hospitals, dispensaries, educational institutions and water schemes and directed them to dispatch the complaints to said cell.

Chief Minister was apprised that complaints could be received through telephone, fax, letter and WhatsApp while the complaint cell would soon be attached with call centre and facility of Google application would be provided.

Published in The Balochistan Point on March 18, 2016

2016-03-19
admin
Previous: Protest Camps Set up for the Safe Release of Zahid Baloch
Next: NADRA Fails to Facilitate Students in Turbt