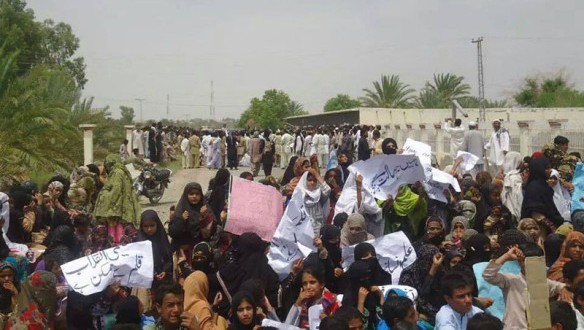 The closure of all private English-medium schools and language centres in Balochistan since April 25 has made headlines around Pakistan. After news of the closure broke, people across the province assumed that the Taliban, or outfits affiliated with them, had penetrated the Baloch belt which is generally known as a liberal region.

But the honour this time goes to Tanzeem Islami Al-Furqan, a previously unknown organisation, which has distributed pamphlets inside private schools and English language/computer centres in the main towns of Panjgur, a district bordering Iran. These Urdu pamphlets warned school administrations to immediately stop the co-education system and asked teachers to refrain from educating girls.

The organisation also directed taxi and van drivers to cease pick-and-drop services for all girls attending these institutions. Parents have instead been advised to send their children to government-run schools. The reasons for the extremists’ stance against co-education are alleged “immoral practices” witnessed in these schools. They claim that “some immoral and objectionable text messages received from the mobile phones of teachers indicate that our Baloch sisters and daughters are being exposed to obscenity through the westernised co-education system.”

Armed activists belonging to Al Furqan physically attacked the owner and teacher of one of the schools and burned his van in broad daylight. Thankfully, the teacher and the schoolgirls were unharmed in the incident.

Panjgur, like the other two districts of Gwadar and Kechh in the Makran division, the hometown of Chief Minister Dr Abdul Malik Baloch, has been in the grip of an insurgency since 2006 when Baloch nationalist leader, Nawab Akbar Khan Bugti, was killed in an army operation. In the elections in 2008, the district had been a stronghold of the Balochistan National Party-Awami (BNP-A), where it had won both provincial seats from the district, because of the boycott by the National Party (NP). But, in the 2013 elections, both seats were won by the NP.

Private schools and English-language centres sprang up in the district in 2000. Since then, their numbers have grown to 22, the highest number of any district in Balochistan. Over 16,000 students are enrolled in these schools, employing more than 500 teachers, both male and female, many of whom are directly or indirectly dependent on these schools for their livelihood.

Government-run schools in the region have all but gone extinct, because most parents in the region prefer their children, particularly girls, to receive uninterrupted education. One of the major factors behind the dysfunction of government schools is the absence of teachers, the majority of whom run the district party structures of both, the ruling nationalist groups like the NP and the Pakhtunkhwa Milli Awami Party (PMAP).

Teachers and parents, along with their children, have kicked-off a campaign against the attempt to thwart the education of girls in Makran, as well as in the provincial capital of Quetta. Different NGOs and welfare organisations have joined the campaign, asking the government to take action.

The Baloch Republican Army (BRA), a known secessionist group, has also sided with the parents and teachers by distributing pamphlets vowing to stand by the struggle against ignorance. It pledged to resist any attempt that prevents girls from receiving an education, saying that an educated society is the only way to achieve the goal of independence.

The provincial government of the NP has sprung into action, issuing condemnations and alongside, directions to the district administration for providing security to the teachers and students. The civil administration has allowed the private schools’ managements to carry weapons for their protection along with the deployment of law enforcement agencies in the area.

The district administration, though, is in a weak position due to the Baloch insurgency and has failed to take any appropriate measures for tracking down members belonging to religious groups who threaten educational institutions. The administration has held long meetings with the managements of private schools and local representatives of political parties, but they have yet to come up with any concrete solutions.

“The schools will definitely be re-opened on June 2, as all arrangements have been made for the security of the schools’ staff and students,” says Wali Mohammad Bareach, the Deputy Commissioner Panjgur. Certain measures such as segregated seating arrangements in the class rooms, separate washrooms, etc., have been taken as a compromise to alleviate the grievances of some locals, he informs Newsline.

The teachers, parents and students have been staging protests over the threats made by Al-Furqan, and denounced the silence of the administration for capitulating to extremists. In Quetta, protest demonstrations by different NGOs working in the education sector are being held against the closure of private schools in Panjgur.

“The government should provide foolproof security to every teacher, student and staff member of these schools,” says Mahrukh, a 15-year-old participant of a demonstration in Quetta. “They should not surrender before these fanatics, who have already destroyed the educational environment in Khyber Pakhtunkhwa and are hell-bent to cause destruction in Balochistan as well.”

The administrations of private schools are not ready to open their institutions merely on the assurances of the district officials and demand the arrest of the extremists. They believe that merely providing security to school buildings and the residences of teachers is not a solution to the problem, but will further complicate the issue.

Meanwhile, Al-Furqan has claimed responsibility for the attacks on the teacher and the school van. Recently, they threw a hand-written note into a school building, warning the administration of dire consequences, should they attempt to reopen the schools.

“The administration kept insisting that we open our schools, without taking any action against those involved in throwing threatening pamphlets, or the attacks on me and the school van,” says Major Mohammad Hussain, the owner of a school. “There is no guarantee that these miscreants will not try something worse if we do open the schools.”

Private school administrations have rejected the accusation made by Al-Furqan that the teachers sent girls objectionable material. “If such things have happened, they should provide evidence so that we can take action against the parties involved,” says Major Hussain. “But, even if a single such incident allegedly happened, there is no reason to shutdown the entire education system of Panjgur.”

The people of Panjgur suspect that security forces are involved in supporting Islamist groups to punish the Baloch people, who are considered to have liberal inclinations when it comes to education. According to them, the military establishment believes that their liberalism is the root cause of the on-going separatist movement.

“Heavy deployment of Frontier Corps all over Balochistan, particularly in Makran, is visible. Yet, armed activists of extremist organisations attack teachers and easily disappear,” says a local college professor on the condition of anonymity.

The Frontier Corps recently confiscated books about famous personalities such as Nelson Mandela, Jawaharlal Nehru, Mahatma Gandhi and Che Guevara terming it as “anti-state literature.” The books were confiscated during raids on the boys hostel of Atta Shad College and neighbouring book shops in the district of Kechh.

Balochistan lags far behind in the education sector compared to other provinces, and educationists claim that with the present literacy rate (56 per cent male and 23 per cent female), the province would take  decades to catch up with the other provinces. The educationists do not rely on the government-provided statistics, which include even those who can merely write their name as ‘literate.’ Besides poor governance and corruption, the education system of Balochistan has been further destroyed by militancy since 2000. As Chief Minister Dr Abdul Malik Baloch claimed in a seminar, 2.2 out of 3.4 million children –  both girls and boys – are not attending any kind of school at all.

This is the first time that a previously unknown organisation has become active against girls’ education in Balochistan. If the government does not take it seriously, many such organisations may spring up in other districts over time.  (Courtesy :http://www.newslinemagazine.com)

Republished in The Balochistan Point on July 1, 2014

2014-07-01
admin
Previous: A love for liberty
Next: Sectarian tilt of society and politics of Balochistan