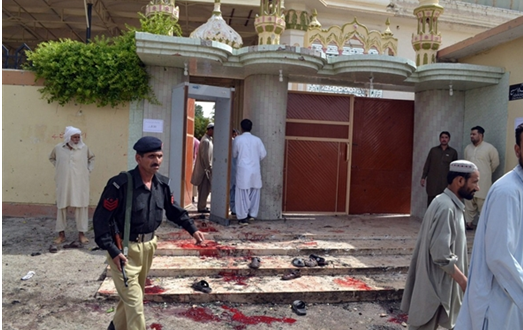 Sectarian tilt of society and politics of Balochistan

The socio-political life in Balochistan is under transformation, from a peace loving and nationalistic ideology towards hardcore sectarianism. The province is engulfed by religious intolerance. Specific tactics are being adopted by various outlawed organizations in order to widen the existing gaps between various communities.

The proscribed sectarian organizations are continuously working to disseminate their ideology in general in Balochistan and in particular in provincial capital, Quetta. One can see their new flags hovering on the electric poles, hatred slogans are present everywhere on the walls in the form of graffiti, and their insignias are visible especially in shape of stickers, calendar cards and key chain’s, motorbikes, bicycles and rickshaws. In addition to that, sectarian indoctrination speeches and music are present at almost every mobile shop. Once can’t fathom how are these organizations outlawed when they openly spread their message and demonstrate and hold protest rallies in center of Quetta City.

The principal support for the religious outfits comes from religious clerics. Religious clerics use the pulpit in mosques to propagate their sectarian agenda. Uneducated and poor people, often, are the victims of the vicious sectarian propaganda. Sectarian outfits have indoctrinated people of every section of the society. They have the support of teachers, Professors, politicians, bureaucrats and even army officers.

The banned sectarian organizations are emerging with considerable street power. In 2013 general elections, the candidate of a sectarian organization bagged 13512 votes, from NA-259 Quetta, and was among the three leading contestants. NA 259 was won by Pashtun nationalist leader, Mahmood Khan Achakzai. Mr. Achakzai is in politics for 40 years, while the sectarian party candidate is politically active for just two years, so one can imagine the augmenting tendency of banned organization in the political arena of Balochistan. So the province which was once the core of nationalist ideologies in shape of Baloch and Pashtun nationalism has been diverted towards a new radical ideology.

The list of deadly terrorist activities carried out by sectarian militant organizations is too long. Sectarian militant organizations have claimed responsibility for deadly attacks on high ranking police officials such as SP Jamil Kakar and DIG Wazir Khan Nasir. A suicide attack inside Police lines took out all the top brass of Quetta Police including DIG Operations Fayyaz Sumbal. Another deadly terrorist attack carried out by a banned organization killed 15 female students of SBK Women University.  The same day Deputy commissioner of Quetta was killed in shootout when the same group took control of the hospital where the injured victims of attack on female students were brought for treatment. Now a question arises, that in a province where high profile government officials are not safe, which are having enough security, is it possible for anyone to raise finger towards sectarian organizations.

So in order to stop proliferation of sectarian ideology, it is necessary for government to make an effective strategy. It is in the best interests of Pakistan to curtail the further proliferation of the intolerant ideology of proscribed sectarian outfits. If timely action is not taken to control the activities of such organizations then the consequences will be Catastrophic. Pakistan will meet the same fate as Syria or Iraq did, if the situation is not controlled when it can be controlled.

I will conclude, with the words of Moulana Waheed-ud-din Khan; an Indian religious scholar, who has written in his book “Pak o Hind diary” that, “God has obligated Hajj upon those who can bear the financial expenses, so if someone fails to accomplish the command of Allah, despite possessing the financial means, he will be consider as sinful and will be treated on the judgment by almighty Allah, but it is written nowhere in Holy Quran, that a second person shall kill the person, who do not accomplish Allah’s command”.  Furthermore in Suriah Fatiha it is written that “Maleeke Yom meddin” which means that Allah is the master of the Day of Judgment, He will punish or reward a person according to his deeds, no one else has the right to punish someone.

The writer is Research Fellow at School of Politics and International Relations, Quaid Azam University Islamabad.

2014-07-02
admin
Previous: Balochistan’s Boko Haram
Next: No apathy would be tolerated in the establishment of new colleges: Chief Minister Balochistan