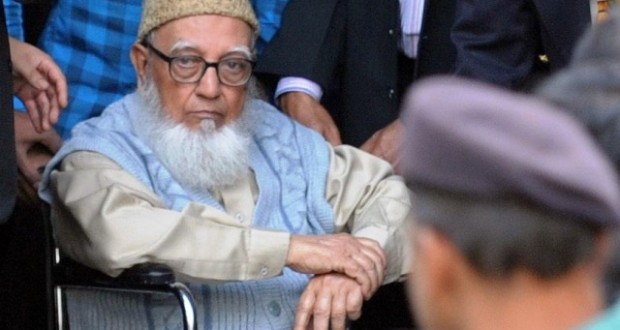 A special Bangladesh court convicts Ghulam Azam, the former leader of Jamaat-e-Islami party of masterminding atrocities during the 1971 war of independence.

Bangladeshi officials and judicial sources say Azam was sentenced to 90 years in jail for his involvement in mass killings during the war.

“He was found guilty beyond reasonable doubt in all five charges. The tribunal observed that he deserved death penalty,” junior Attorney General M.K. Rahman said. The 90-year-old politician has denied the charges against him and his supporters say they are politically motivated.

Ahead of the verdict by the Bangladesh International Crimes Tribunal (ICT), clashes erupted between police forces and supporters of Azam. Several Human rights groups and organizations say the tribunal which tried Azam fell short of international standards.

The special tribunal has already issued at least three verdicts against party members, including death sentences for the party’s vice president and a former member.

The top leaders have so far been convicted by the controversial tribunal for their role in mass killings during the war, which saw what was then East Pakistan break from Islamabad.

This comes while the opposition accuses the government of seeking to intimidate them by trying their leaders for alleged war crimes committed more than 40 years ago.

People have taken to the streets of Dhaka and some other cities several times to protest against controversial trials of opposition activists and leaders.

More than 150 people have been killed in clashes with police since the beginning of this year.

Main opposition Bangladesh Nationalist Party (BNP) and several Islamic groups have staged several nationwide strikes to strongly condemn the ‘mass killing’ of protesters in a crackdown by security forces over the past few months.