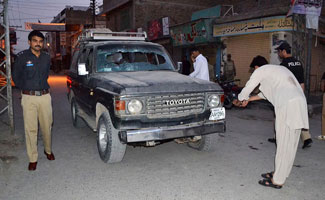 Quetta:  At least four people from Hazera community were killed on Monday evening, when armed men opened fire at the vehicle on Masjid road area of Quetta.

According to the police officials, four militants opened fire at the vehicle on Masjid road area of Quetta and all four men sitting in the vehicle were seriously wounded and succumbed to their injuries on their way to the Combined Military Hospital,

The attackers managed to escape after the attack. Police said

The victims belonged to the ethnic Hazara community and were attacked when they were shutting down their shop. A large number of police and Frontier Corps (FC) personnel cordoned off the area and started investigation into the incident.

Hazara community has been facing murder of its members for a decade. More than one thousand people from this community have been killed in target killings and suicide attacks and hundreds of them wounded.

Monday’s attack is after a deadly suicide bombing at Imam Bargah at Aliabad, killed 30 members of the Shia population in Hazara Town. The Lashkar-i-Jhangvi had claimed responsibility for the blast.