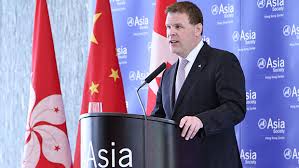 Though, the human rights violation in Balochistan is not being taken seriously by the state authorities, the world community is becoming aware of this burning issue and concerns are being expressed.  Recently the Canadian foreign affairs’ minister has expressed worries over human rights abuse in Balochistan. This move came in response to a letter of the coordinator of International Voice for Baloch Missing Persons to Canadian foreign minister.

The Canadian foreign affairs minister Mr. John Baird has expressed his concerns over human rights abuse In Balochistan. He in response to the letter said “The promotion and protection of human rights is an integral part of Canada’s foreign policy and I have noted with concern the reports of forced disappearances and extrajudicial killings in Pakistan’s Balochistan province.”

Mr. John Baird strongly condemned acts of persecution on the basis of ethnicity or religion and shared international concerns about the treatment of Pakistani minorities, including the Baloch. “Canada takes every appropriate opportunity to express its views to the Government of Pakistan regarding its international human rights obligations and the need to ensure the safety and well-being of all its citizens, regardless of ethnicity or religion.” Said Canadian foreign Affairs minister

Mr. John Baird said at the United Nations Universal Periodic Review of Pakistan in October 2012, Canada recommended that Pakistan take strong and appropriate measures to bring to justice the perpetrators of such unacceptable attacks against activists and human rights defenders. He concluded that The Government of Canada would continue to monitor the human rights situation in Pakistan and urge Pakistani authorities to respect their international human rights obligations.

No doubt, the human rights violation is on rise in Balochistan. According to the human rights organizations number of dead bodies of Baloch missing persons have been found and thousands are missing, allegedly done by state supported authorities. Unfortunately, the issue of Baloch missing persons and recovery of their bullet riddled dead bodies have not been taken seriously. The political powers and judiciary have also failed to resolve this matter. Though, time and again the international and national human rights organizations have urged state establishment to probe into the cases of human rights abuse, no success has been witnessed in favor of the victim families.

The government of Pakistan and Islamabad need to change their policy towards Baloch and Balochistan. The same atrocities in PML- government are still continued, as they took place in PPP government. All the claims of newly elected government seem to be in vain, since the power was transferred to PML-N government, acceleration is seen in abductions and extra judicial killings of Baloch. The human rights organizations, governments of Pakistan, and judiciary have to make efforts to overcome this problem so the human crisis may be mitigated.

Published in The Balochistan Point on July 16, 2013