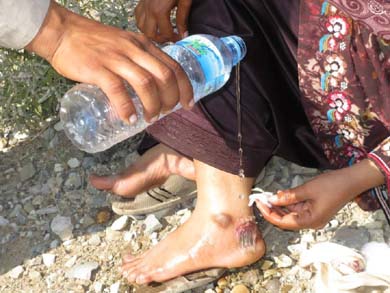 The missing person’s case of Baloch entering in an appalling situation even after the UN delegation visit to Pakistani courts and Balochistan to help in resolving of the cases. After the Musharaf regime the past five years were worse for Balochistan as thousands of Baloch has been abducted and killed. During the Musharaf era the abduction of persons began, thus who disappeared at that time came back home within a year or two. But over the past five years during the PPP’s regime Baloch received only mutilated bodies dumped in all corners of province. Where as the snubbed bodies received on such barren places where none wants to go for years.

When the UN fact finding mission launched its 10days visit to Pakistan on enforced disappearance in September 2013, The relatives of allegedly disappeared persons considered it a great move that UN to investigate about the cases being given deep ear from government.

Missing person’s relatives along with Baloch nationalist groups and human rights organization demanded their missing person’s safe release as assumed that the country’s intelligence and law enforcement agencies have purportedly detained thousands of people while some have turned up as corpses and the face of thousands of others remaining unknown.

The 10-days fact finding trip from UN has emphasized on the government to do more to address the problem of missing persons in the country but all were messed up is there appeared no justice for the relatives to receive their beloved ones up to till now.

The disappearances and kill and dump policy is swelling day by day where is a list which was handed to the UN, listed 12,000 missing persons but it has been now said the number had grown to 18,000 and the mutilated dead bodies of 1,500 missing have been found dumped in different barren landscapes of the province in recent years “apart from that, 600 people were killed in target killings, including professionals like doctors, and around 28 journalists killed for writing the truth”, was revealed by Mama Qadeer Baloch, vice chairperson of an organization, Baloch Human Rights Organization. Seeing no any optimistic response from UN delegation after waiting for the final reports of that fact finding mission team the relatives of missing persons saw it cry in wilderness.

However, the Baloch missing person’s cases were taken under the trail after intervals of time by the chief justice of Supreme Court for a specific period there in Quetta but the conclusion was incredibly disinterested as no missing person’s fate changed.

After 11 May election when a co-elation government has performed and Dr Abdul Malik took oath is the Chief Minister of provincial assembly has declared in a press conference that the appalling case of Baloch missing persons will be his first priority problem to be resolved as soon as possible, disappointedly after a passage of time when the cry from missing person’s relatives intensified the honorable Chief Minister has told in a press conference in Karachi that he is failed to resolve the case of missing is owing to some bottlenecks that are beyond to his limit, this response from him dusted the thoughts of Baloch towards him and his party has been condemned vociferously. However, this show the missing persons are in custodies of those intelligence services who have already cleared that they will not be recovering any missing person in front of the courts during session of petitions as none from evicted appeared before the court to defend the case being supervised under the supervision of  a judicial bench in supreme  court.

BHRO, as being a Baloch Human Rights Organization has raised the voice of missing and others extra-judicially killed Balochs to turn the faces of national and international human rights organization to take prompt actions on such human rights violations.

According to vice chairman of BHRO Mama Qadeer Baloch that they have requested, Human Rights Watch, Amnesty International, International Committee of the Red Cross, Office of the High Commissioner for Human Rights, European Human Rights Court and HRCP to wholeheartedly observe the situations and also come and visit the areas of Balochistan where Baloch are receiving their beloved ones dumped and bullet mutilated bodies on daily bases.

Balochistan is the least developed, but it is rich in copper, gold and natural gas, is the largest and least populous province. The presence of natural resources and the geographical importance including the Gwadar port which is at the mouth of Strait of Hormuz earned an international name for it, which has exacerbated a long running ethnic Baloch separatist movement that wants autonomy and a greater Balochistan in the region.

There rose up many insurgencies after the partition of sub-continent when Balochistan has been supposedly included in the territory of Pakistan but the latest and very momentous one rose up in 2004 during the regime of Musharaf.

This has got more escalation after the assassination of reverend Nawab Akbar Khan Bugti and three other National activists Ghulam Muhammad, Lala Muneer and Sheer Muhammad.

Whereas the case of missing persons concerns the accusations from security services rebuff it and say that they are battling a fierce rebellion in the province.

Baloch are being treated brutally there remained no any margin for the security services, anywhere they want can lunch any sort of operation, harassing the females and disrespecting the reverends which is excruciating, if this is a transgression or wrong deed to rise a voice up for the deprived nation then every Baloch is a terrorist come and slaughter them; Said an activist of a separatist organization.

Ostensibly, observing no any positive response from the concerned authority it has compelled the relatives and BHRO to call for a long march on foot that would be historical and very pressurizing expedition, its first phase has initiated from Quetta on 27 October and 725 grueling kilometers of walking across scorched, arid plains to seek justice for missing ones and take the attentions of media to highlight it but this was contrary to this as there was not any media to coverage them. BHRO’s long march for safe release of missing loved ones led by an oldly Mama Qadeer accompanying by some three or four dozen women from troubled Baloch and latter there appeared a great protest as it was persuaded by many baloch brothers as well. The long march walked on foot nearly for a month for their brothers, sons and husbands who have disappeared purportedly at the hands of security services.

The sons and daughters of disappeared Baloch were holding placards and Photos of their beloved ones were escorting the parade till its closing stages.

15 years old Sammi Baloch, daughter of Dr. Deen Mohammad who was allegedly disappeared on 2009 on his duty place, said that she is worn-out of waiting for justice so that they have undertaken an unprecedented long march to record a remonstration that may eavesdrops ever.

Mama Qadeer Baloch father of Jalal Reeki, who was first vanished and later dumped in a barren place. During the detention of security services there had came many messages to him that relinquish rising up the voice of Baloch missing persons if not in results he and his family would be debilitated. He himself said, he thinks all the missing persons are his sons so that he cannot come into the disheveled concessions of any one. It is rationale he has taken charge of this arduous long march for those missing persons and wants justice at any cost or else they may prolong the march to Islamabad as well. This was highlighted during the session of a conference in Karachi on the eve of completion of the first phase of exhausted long march.

The 10 years child Ali Haider with his sisters Samina Baloch was also walking with their scorched feet in the march till Karachi, whom father Ramzan is missing from 2009 from Zero Point on the road to Gwadar. He said he will do any thing for his father and his safe release.

Farzana Majeed was as well a member of this unmatched march whose brother Zakir Majeed in June 2009 disappeared from Mustang and the family heard nothing until 2011 when another activist of a political organization arrested with him was released. How are feelings of us and how bad is the condition of my mom, which for I am in troublesome with my other companions and crying to call the international committee come and listen to us because here is not any Human Rights organization be hearing us.

Now the grueling long march has came to its closing stages of the first phase, let see how the chief justice and concerned authority be able to take to prompt action on it to allow Farzana Majeed, Ali Haidar, Sammi Baloch and including others almost immediately see their beloved ones had gone missing long ago.

After staying half month in Karachi, the long march for the safe release of missing persons initiated its second phase of 1468 km grueling march on foot to Islamabad on 13 December.

Will newly designated chief justice of Supreme Court give it worth apprehensions and fight with tooth and nail to help the relatives of missing meet with their beloved ones as soon as possible? ( (Courtesy :Bolan Voice)

The writer can be reached at anpahar30@yahoo.com

Republished in The Balochistan Point on December 30, 2013

2013-12-30
admin
Previous: Hope dashing in droughty Balochistan
Next: Quetta and other parts of Balochistan in the grip of severe cold