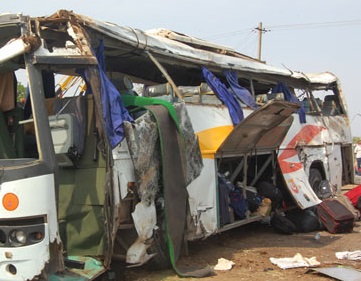 QUETTA: As many as 6 people were killed and 36 others injured when a bus en route from Quetta to Kharan overturned near Nushki, on Sunday.

According to the reports, the driver lost the control of the bus near Nushki at an area called Sultan Charhai. As a result, the bus overturned and left six people dead and 36 others injured.

Local administration and the rescue teams rushed to the site shortly after receiving the information and shifted to the injured and dead to the nearby hospital.

The dead were identified as Afia Bibi, Muhammad Siddique, Haji Lal Jan, Abdul Khaliq, Muhammad Ismail, and Muhammad Ismail. The bodies were handed over the heirs after medico-legal formalities.

The injured were later shifted to the Quetta for further treatment.