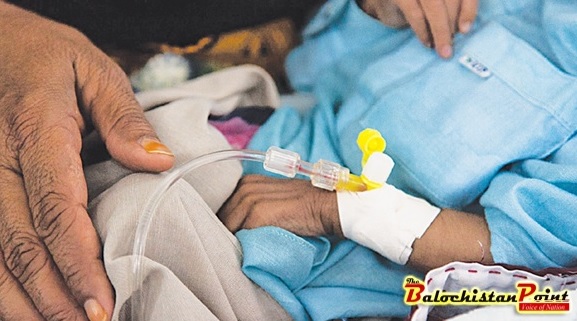 The notion of “Cancer ~death, no longer”, doesn’t seem acceptable in Balochistan

The growing numbers of cancer patients’ along with the responsibilities of government authorities in Balochistan are also increasing the tasks of volunteers and journalists in Balochistan.

Most of the patients of different ages belong to poor families who are unable to bear the cost of life saving treatment. The recent past has witnessed that volunteers and journalists played their due role in highlighting cancer cases even launched campaigns to collect donations for patients but this it is not considered the long lasting answer of this question. Some of the activists are active to get attention of authorities for establishment of a free cancer hospital in Balochistan.

Young social activist and founder of Quetta Online Zia Khan, who has contributed    in campaigning, says: “The people of Balochistan are suffering from cancer in many districts due to unavailability of good cancer hospital. They always go to Karachi for treatment but as we know the treatment of cancer is not only expensive but also it takes long time that people of Balochistan cannot afford the expenditures and there is no such support from any government or private organizations.”

“Asking for donations cannot be helpful always, because no individual can afford from 1 to 5 million rupees. On behalf of Quetta Online we are working for cancer hospital as well facilitation cell where we will support needy people.” Zia Khan said.

Human rights defender and political activists Shazia Langove says: “Awareness campaigns about the causes of cancer should be launched through media and TV channels.

“The worst conditions of government hospitals are also responsible to add to the diseases and doctors who are known as angels but after contracts with pharmaceutical companies they are prescribing non relevant medicines to patients that are also causing cancer.” She added.

Shazia Langove  said that the existing hospital like Shoukat  Khanam and few others needed to reduce their fees, as they overstressed to treat free of cost but that was not the reality.

Rubina Ibrahim Zehri, a staff member at Balochistan Voices and one of the active social media activists in campaigning for appealing financial assistance for cancer patients and establishment of free cancer hospital in Balochistan, says: “Cancer is a deadly disease which has taken lives of so many precious individuals. We lost our beloved Rehan Rind and a lot of others to Cancer. Still there are a rising number of cancer patients from Balochistan and they do not have the required resources for their treatment.”

“The most practical solution will be to get the new Shaukat Khanum Caner hospital built in Quetta. We need the support of people from all walks of society and together we can defeat cancer.” Rubina added.

Imran Baloch, lawyer by profession and founding member of Rehan Rind foundation says that they are determined to establish cancer hospital in Balochistan which is main demand of their foundation.

“We seek public support in establishment of hospital in Balochistan to fulfill the dream of late Rehan Rind, a cancer patient who lost battle of life in August 2016.”

Rising awareness of the signs and symptoms of cancer helps in early detection of disease. Because then the treatment will be most effective.

Dr.Mir Sadaat from University of Balochistan is also of the view to enhance people awareness about the disease so that could be traced at early stages. “As a society we need to develop a moral support system for the families that are fighting cancer.” Dr said.

Mariyam Suleman, Assistant editor at The Balochistan Point suggests establishment of one good Cancer hospital and an authentic research to find out causes of Cancer those are affecting so many people specially youth in Balochistan.

No doubt the newer anti cancer drugs and latest equipments available in the modern age can help fight cancer effectively, however, the notion “cancer ~death” no longer does not seem acceptable in Balochistan as caused by the poor interest of Islamabad and Balochistan government.

Zia Khan questioned the reason for ignoring Balochistan and demanded from   government and all other stake holders to give serious attention to this issue and establish free cancer hospital in Balochistan.

Published In The Balochistan Point on February 04, 2017