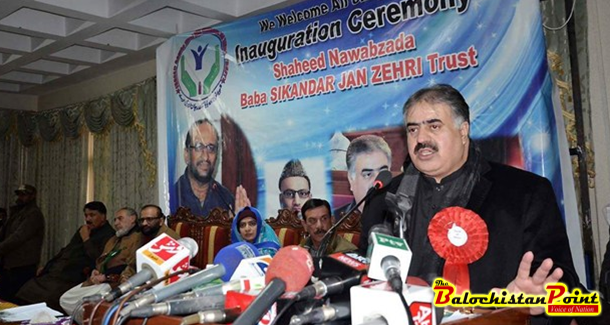 Addressing to the launching ceremony of Ambulance Service under “Nawabzada Sikandar Zehri Shaheed Trust”  Nawab Sanaullah Zehri said that Balochistan is a vast area and its population is scattered in case of huge incidents the injured could not reach hospitals timely.

Chief Minister said that wealthy persons and philanthropists should come forward and play their role in serving masses as we lack hospitals. “I announce establishment of a Cancer and Cardiovascular hospital in the province besides setting up Trauma Centres in all districts,” he said.

Paying tribute to Abdul Sattar Ehdi, he said that Abdul Sattar Edhi had started ambulance service when the Karachi was passing through a critical phase where on daily basis people were being killed and it was Mr. Edhi who would take them to hospitals.  “Through the ambulance service of Edhi Foundation a huge number of lives had been saved,” he added.

Referring to Guddani Ship breaking-yard fire incident, in which a number of precious lives were lost, Nawab Zehri said that he had put a ban on dismantling of LPS containers and oil tankers in Guddani despite immense pressure. “First time some responsible had to go behind bars because I believe a single life is more precious for me than billions of rupees,” he said, adding that ships owners mint a huge money and profit from this industry they should also build schools, hospitals and worker for the welfare of workers and area people.

On the occasion, Nawab Sanaullah Zehri announced Rs 5 million for Edhi Foundation and attributed Hockey Chowk with the name of Abdul Sattar Edhi Chowk in recognition of his services he rendered for the humanity.

Addressing on the occasion, Faisal Edhi son of late Abdul Sattar Ehdi lauded foundation of Sikandar Zehri Shaheed Trust and offered every possible support on the part of Edhi Foundation.

He said that though the Balochistan is rich in mineral resources yet its people are poor and the province is scattered therefore government must think about commencement of Air Ambulance Service to avoid more losses in case of any huge incident.

Speaker Balochistan Assembly Rahila Durrani said that Sikandar Zehri Saheed Trust is a vision and we have to materialize this vision by devoting ourselves for serving humanity. Starting of Ambulance Service would save a number of lives who could not reach hospital on time, she added.

She said that Abdul Sattar Edhi is her ideal and she hopped that Sikandar Zehri Trust would imitate Edhi Foundation and service the humanity.

Published in The Balochistan Point on February 4, 2017

2017-02-05
admin
Previous: The notion of “Cancer ~death, no longer”, doesn’t seem acceptable in Balochistan
Next: Cancer diseases in Balochistan