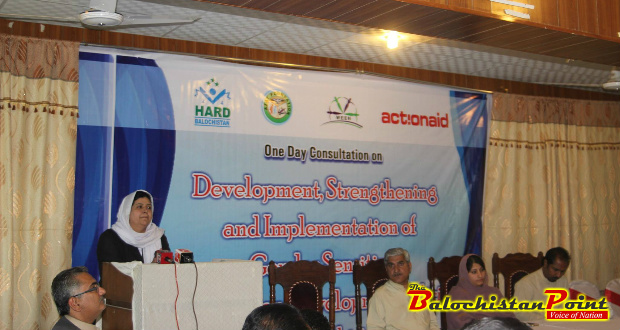 Changes in Socio-Cultural Attitude must for Women Empowerment – Participants

One day consultation meeting was organized by Health and Rural Development (HARD-Balochistan) with collaboration of Azat Foundation and ActionAid on the topic of “Development, Strengthening and Implementation of Gender Sensitive and Women Development Policies in Balochistan,” on Thursday.

Consultation meeting which was a part of activities of Women Economic Empowerment Network (WEEN) was held in Boy’s scouts association hall.

Shazia Langove, Secretary Women affairs National Party Quetta Chapter, lamented the attitude of society in general which she termed as anti-women. “In most cases the sensitization efforts made through seminars and workshops have no effect on discriminatory behavior of men towards women,” said Miss Langove.

Sharing her political experience, National Party’s Women secretary said that prevailing social and cultural attitudes are obstacles for entrance of women in politics.

Sensitization efforts made through seminars have no effect on discriminatory behavior of men towards women – Shazia Langove.

Ghulam Nabi Marri, general secretary of Balochistan National Party Quetta Chapter, claimed that state as a whole has failed to provide constitutionally-mandated rights to women. “Laws in Pakistan are never implemented in letter and spirit, so it’s pointless to link women discrimination with loopholes in legislation,” He said.

Saleem Baloch, regional manager of Idara-eTaleem-o-Agahi (ITA), stressed the need to end discrimination against women from the field of education first.

State as a whole has failed to provide constitutionally-mandated rights to women – Ghulam Nabi Marri.

Waseem Kamran Advocate, a legal consultant for social development sector, delivered a detailed presentation on loopholes in the legislations meant to protect the women’s rights.

Published in The Balochistan Point on October 1, 2015