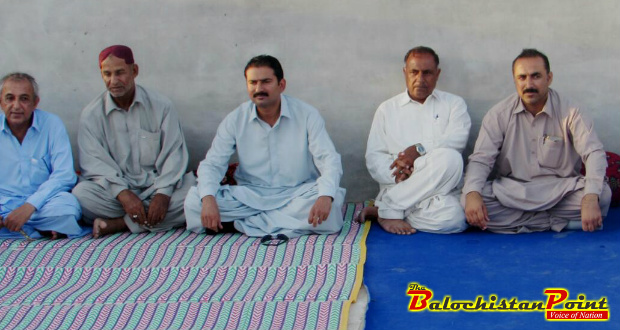 Gwadar – Member of Provincial Assembly (MPA) from Gwadar Mir Hammal Kalmati expressed his disappointment on the sluggish efforts of the ruling party along with Dr. Malik’s failed governance during a press conference held in Sur Banden area of Gwadar, this Tuesday.

The press conference in particular was held to announce the joining of Lal Baksh, Syed Mohammed and Bibi Hameeda in Balochistan National Party (BNP). The newly joined members are representatives of Sur Banden in the local government and have been serving as councilors along with them a few other members have joined BNP too.

Addressing the press conference, MPA Hammal Kalmati alleged that the ruling party has deceived the people of Balochistan. All the promises which were made before elections are not even talked about any more, he claimed.

Commenting on the issues faced by the people of the port city, the MPA said, “During the two and half years governance, Dr. Malik signed several declarations to hand over Gwadar to China for different projects but he left the major issues unnoticed. During the construction of Aankada Dam, Gwadar’s population was 25,000. No doubt there will be shortage of water now because the population has rapidly been increasing”

The MPA claimed that when he was the fisheries minister of Balochistan, the nearby areas of Gwadar for instance; Jivani, Pishkan and so on got 18 hours of electricity but now they only get 4 hours.

Mir Hammal Kalmati questioned that why Dr. Malik did not sign the declaration related to CPEC and Gwadar when he himself attended the signing ceremony in China?

“CPEC will not only change the demographics of the natives of Balochistan but it will completely change this legacy of the Baloch fishermen. An expected increase of 5 million in the population by 2035 will be a big challenge. Natives will perhaps be outnumbered and even right to vote will make no difference to them hence there is need to work on development projects on grass root level not only attending signing ceremonies and remaining silent,” said the MPA.

Addressing the GDA school issue, Mir Hammal said that the only school of Balochistan with billions of investment is another example of National Party’s failure. Several teachers that have been appointed with political basis have not only destroyed the academics but also the discipline of the school. Few teachers with political support are getting paid without giving any duties.

The MPA claimed that GDA Hospital which is yet not functional years after its construction is an epitome of Dr. Malik’s governance. Dr. Noor who was appointed as the head of the hospital two years ago, is the brother of Dr. Yasin a prominent leader of National Party. Dr. Noor gets Rs. 200,000 every month as his salary for giving no duty in a non-functional hospital.

Gwadar 2015-10-01
Editor
Previous: Recruiting Teachers through NTS not less than a Miracle: Dr. Malik Baloch
Next: Changes in Socio-Cultural Attitude must for Women Empowerment – Participants