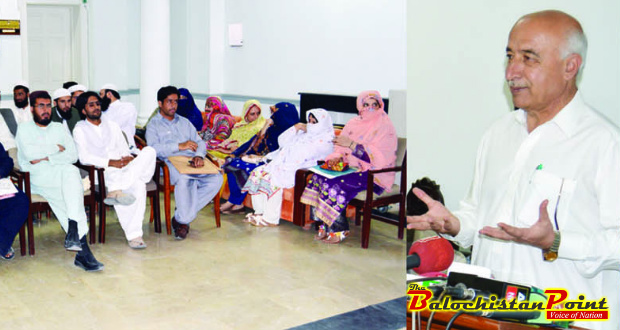 Recruiting Teachers through NTS not less than a Miracle: Dr. Malik Baloch

Quetta – Chief Minister Balochistan, Dr Abdul Malik Baloch has said that recruiting teachers through National Testing Service (NTS) in Balochistan is not less than a miracle. “People were unconfident about the process but the incumbent government fulfilled its commitment,” he added.

He expressed these views while addressing the Appointment Letters Distribution ceremony among candidates who had qualified NTS test for teacher’s recruitment, here at Chief Minister’s Secretariat on Wednesday.

Chief Minister Balochistan said that recruiting teachers through NTS would not only ensure appointment of deserving candidates but it would also improve the quality of education in the province. “Taking the decision of NTS was very difficult, we had pressures but we took this critical decision to ensure merit and transparency in the province,” he said.

“Handing over the appointment orders to the deserving candidates I feel honored and it is a matter of joy for me because we are taking steps wholeheartedly with good intensions to improve education sector,” Said CM Balochistan.

He said that the candidates were given full opportunity to submit their complains and grievances against NTS’s recruitment process, adding that civil society and media ought to help government to end absenteeism of teachers and ensure education reforms.

“Government brought a big change in the shape of reforming Balochistan Public Service Commission that recently recruited 700 lecturers and 1200 are about to recruited,” he said, adding that it was first time in the history of Balochistan that talented and capable aspirants are confessing that they had got their rights.

He said that he had received no complain about BPSC and appreciated Chief Secretary and Secretary Higher education for implementing the process of recruiting teachers through NTS and ensured transparency.

Addressing on the occasion, Education Advisor to Chief Minister Balochistan, Raza Muhammad Barech said that ensuring recruitment of teachers through NTS is a revolution in education sector.

He said that over 95 thousand applications were received from different districts and M.Phil degree holders also took part in NTS, adding through this decision not only the image of Balochistan would improve but the trust of people upon government would further strengthen.

He informed that 5,000 candidates would be recruited by 12th October, 2015 and 1,700 more vacancies would be filled through NTS in the ongoing year.

NTS was criticized by Civil Society and candidates for irregularities in testing procedure of teacher’s recruitment.