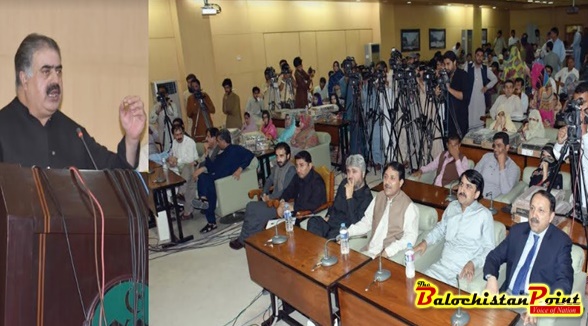 CM Balochistan says, Journey of Peace, Prosperity and Development is underway across the province

QUETTA: Chief Minister Balochistan, Nawab Sanaullah Khan Zehri Monday said that dark days of Balochistan had gone away as the journey of peace, prosperity and development was underway across the province after great sacrifices of masses and security forces.

“A bright and educated Balochistan is my dream and I want to materialize my dream before transition of incumbent government so that masses could always remember us with good names, thus the youth of Balochistan should put their all efforts and energy towards education,” he added.

Addressing laptop distribution ceremony at Sikandar Jamali Auditorium at Civil Secretariat, Chief Minister said that it had been my dream to do something especially for youth of Balochistan so that they could be brought at par with students of other provinces. “God has given me an opportunity and I am so glad in distributing laptops amongst students of the province,” Nawab Zehri said.

He said that under Chief Minister Laptop Scheme Program over 10,000 laptops would be distributed amongst all intelligent and deserving students of the province. “Our youth is now cautious that is why our educational institutions are overcrowded and government would leave no stone unturned in supporting the youth which is the future of Balochistan,” he said.

He said that incumbent provincial government was paying serious heeds towards improvement of educational institutions and taking strict against ghost teachers and other staffers.

Chief Minister said that Balochistan was making development in all sectors as the days of darkness had vanished owing to sacrifices of masses, teachers, students and security forces.

He said that PML-N government always played a significant role in the development of the country despite hurdles and conspiracies against it in all its tenures. “Whenever PML-N came into the power country was passing through serious crises and it was the dynamic leadership of Mian Nawaz Sharif that today country is on the track of development and progress,” he added.

Chief Minister said that conspiracies against PML-N government would not be successful because the people had already rejected all sit-ins and protests of a so-called party. “We should let the masses to decide who is right or who is wrong,” he added.