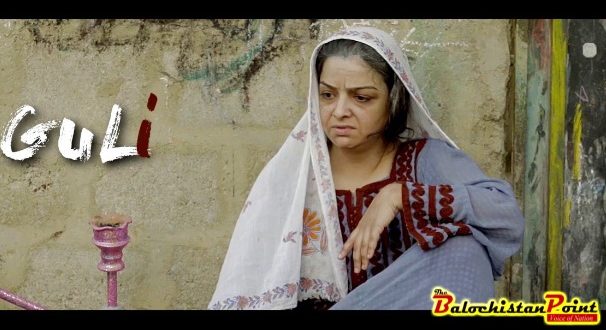 Film culture emerged in Baloch society some eight years ago. It has been developing very rapidly for last for 5 to 8 years. This spring not only came in Baluchistan but also blossomed in Karachi. Quality short films and documentaries highlighting social and political issues gave a great phase to medium of films in Baloch Society.

We can see many production houses nowadays in Karachi, like Junz, Dhanz, Nosach and many more. Nosach is a production house which gave few but worth watching films to Nation.

On July 23rd’2017 Nosach again did a historical attempt and introduced us with a short film “Guli”. Guli is a film by Imran Saqib which was played on screen at National Museum, Karachi. The film was based up on hardship of working women. This 13 minutes film compelled everyone in auditorium to think for two minutes, how many women like Guli we know around?

Guli is an illiterate poor lady. Who is living in an area which people mostly called Slums place, Lyari and bearing her drug addicted Husband who was nothing more than a burden. But Guli in herself was very knight and courageous lady who was facing worse circumstances but waiting for a sunshine which will make bright future of her daughter, Mahgul. Her autonomous nature never allowed her to spread hands in-front of someone and this made her self-reliant. Her snarly nature was the sign of broken heart but not the defeat. She was fighting with concepts who think women cannot survive without men, either the men is her father, brother or husband.

Guli is also a woman with many wishes and dreams like others do but apathetic society brought her in this condition that she never expect any single thing from anyone, neither husband nor brother. Her only exertion was her daughter to be a successful woman. She never wanted her daughter to face those circumstances and frustrations as she did.

Guli is not only a woman in Lyari but there are many Guli’s in Malir and also in other communities. It’s not about indigence that makes their surviving difficult but also their drug addicted husbands give their life a worse face.

Guli is the message of courage and hope which every human should never leave. Most interesting part of the film is leading actress Guli is Baloch actress Mahlaqa Baloch. It is the first ever Baluchi film having a woman protagonist and 95% cast of the film are females. Imran torn all the fascinating barriers who think women is a name of honour and should not come on screen.

Published in The Balochistan Point on July 25, 2017

2017-07-25
admin
Previous: CM Balochistan says, Journey of Peace, Prosperity and Development is underway across the province
Next: Dilapidated Condition of Government Schools in District Kech