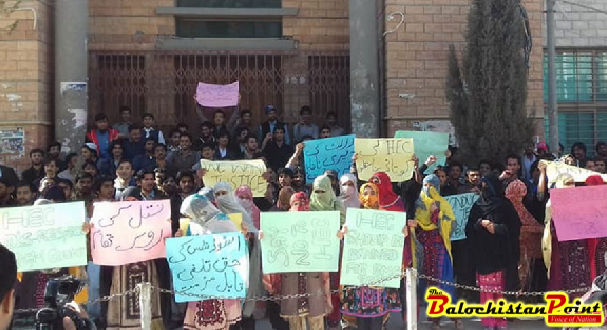 Concerns over the Medical entrance tests in Balochistan

For the last few day a huge crowd of students are being seen in front of the Quetta press club, chanting the slogan: We want fair test, we want justice and demanding from the concern authority to listen their voice. They are demonstrating without a pause to say repeatedly that they are the victims of irregularities; they need from the authorities to ensure the managements during the test.

Howevr these students are sparsely striking against the irregularities in entrance test of Bolan Medical University and other medical colleges which of  Makran,  Jahalawan and Loralai. The mentioned test was conducted on 4th February in the premises of Balochistan University. While inquiring about the reason of the demonstration a student who has taken the test said that cheating was observed in the test and he too strongly included himself among the students who are the eye witnesses to report the mismanagement, cheating and conversation during the test time to share the answers.

The protestors while taking to the the Balochistan Point   claimed that the given answer keys were also wrong and irregular which had intensified their reservations.

Haroon Baloch, A student of Bolan Medical College, who is actively leading the protesting students told the scribe  that the test was about to start at 10am as time given by HEC but it started around 1 o’clock, which clearly indicates how determined the authorities were. “We are also the part of the demonstration for the actual reason of ensuring the merit. If test remain the same, it will demoralize the students in future,” He added.

Balochistan Point approached a candidate named Mehmood lal. He told the writer that he had been preparing for entry test for last 2 years right after the matriculation but he found himself shocked during the test as if he was appearing in a lower class examination.

Another candidate Zubair hammed raised the same point as told by the previous candidate. Majority of students when approached were explicitly having the same points. But when the resolution of this strike was questioned they straightly demand to cancel the test and re-conduct it with a surety of fair management.

For the sake of inquiry on these concerns Chief Minister of Balochistan Qudoos Bezanjo visited the protestors at Press club and assured of forming a committee to investigate the matter deeply. He has ensured the protesters to cancel the test if any irregularities were seen.

Dr Nawab Baloch told that they had reservations from the 1st day. “Right after the test, when majority of candidates approached us and told about the test. After that we approached the authority but they rejected the claim of students. On the evening we issued a press release and informed the people about the irregularities that were observed during the entrance test,” he added.

Dr further added: “CCTV footage of test clearly confirms the claim of students and we stand with protesting students. Because all the genocide of merit, we have to speak.”

Dr Irshad Baloch, President of Baloch Doctor Forum told scribe that cheating was observed and this all was deliberately done to capture the merit seat. “NTS is a better option for conducting the test for medical college.Students are preparing for the test for years if situation remains like this no one will study.” Dr Irshad shared his concerns.

Irshad Baloch pointed out that it was a state of disgrace for the provincial minister health not even to visit the protesting students. He is even not aware of the situation.

Students seeing the condition and voice being not heard properly now contacted the High Court which they eventually can trust to give them a forum.

Aziz Ejaz is currently affiliated with Balochistan Point as staff reporter. He is an M. Phil Scholar at University of Balochistan.

Published in The Balochistan Point on February 11, 2018

2018-02-11
admin
Previous: Prominent human rights activist Asma Jahangir passes away in Lahore
Next: How Pakistanis can get the most from Online Shopping sales