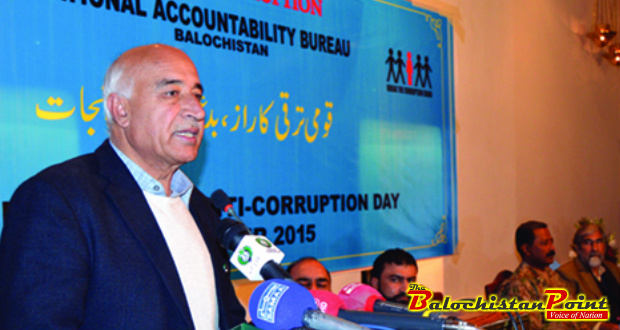 Corruption is Root Cause of Terrorism: Dr. Malik Baloch

Quetta: Chief Minister of Balochistan, Dr. Abdul Malik Baloch, has said that corruption is the leading cause of terrorism incidents.

He made this comment while addressing a program held by National Accountability Bureau (NAB) Balochistan to celebrate International Anti- corruption day, on Wednesday.

9th December has been designated by United Nations as International anti-corruption day.  Theme for this year is “Break the corruption chain.” Ending corruption is a part of Sustainable Development Goals of United Nations.

Corruption is a major problem in Pakistan as the country stands at 126 out of 174 in Corruption Perception Index of 2014, issued by Transparency International.

Addressing the program, Dr. Malik Baloch further said that, “In past politicians have been blamed for corruption but there is no such allegation on me.”

He added that his government has taken a lot of steps for eradication of corruption in the province.

Noting down accomplishments of his government to curb corruption, CM Balochistan said that “In past youth paid bribe to get jobs but now transparent recruitment takes place through NTS (National Testing Service) and Balochistan Public Service commission (BPSC).”

Highlighting the corruption of bureaucracy in Balochistan, Dr. Malik questioned, how bureaucrats managed to build posh bungalows in Karachi defense with their salaries?

Dr. Malik Baloch also urged NAB Balochistan to take stern action against those people who are involved in corruption in Balochistan.

Provincial Minister for Home and Tribal Affairs, Sarfraz Bugti, said that corruption is an administrative issue and it can only be controlled through departmental checks and balances.

Mr. Bugti added, “Education department has been destroyed by Government Teacher’s Association (GTA) and political leadership which is also a form of corruption.”

“A person can never be free from corruption until he believes God in a sincere way,” said Fazal-e-Haq Mir, Principal of Tameer-e-Nau College Quetta.

Director General of NAB Balochistan, Tariq Mehmood, also addressed the program. He said that accountability of the corrupt people is the need of the hour.

Mr. Mehmood further said that NAB is conducting different activities to raise awareness about corruption such as debate competitions, calligraphy and poster competitions.

At the need of the program, Dr. Malik Baloch, Sarfraz Bugti, Tariq Mehmood and Major General Aftab distributed certificates to the winners of different competitions held by NAB.

Published in The Balochistan Point on December 10, 2015