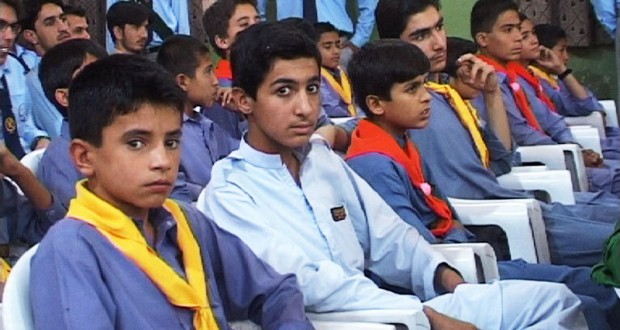 A survey conducted by the Institute of Social and Policy Sciences (ISPS) says there is only one teacher for every 123 students in Quetta’s Muhammad Khail Punjpai tehsil. This comes as a stark contrast when compared with the Apwa Girls School located in the heart of the provincial capital that has one teacher for every three students.

“This disproportion is a major problem for us,” Ghulam Ali Baloch, Education Secretary Balochistan, told Dawn.

The findings of the ISPS survey is indicative of the mismanagement and corruption coupled with extreme political interference that appear to be the underlying factors behind the poor literacy rate in Balochistan which although resource-rich remains the least developed province in the country.

But while previously the provincial capital had not painted a picture so bleak, the latest ISPS survey shows that the dire straits at government-run schools in Quetta are pushing it towards illiteracy.

“The enrolment ratio of children is 53 per cent whereas the ratio of out-of-school children is 47 per cent,” Nazar Bareech, who was in the team that conducted the ISPS survey, told Dawn.

There are 553 government-run schools in Quetta — 339 for boys and 214 for girls — that cater to some three million students. Moreover, there are 5,299 teachers, with 54 per cent for secondary schools, 18 per cent for middle schools and 28 per cent for primary schools.

“There are more than 30 female teachers for approximately 100 female students in the girls’ high schools located in Quetta,” Niamatullah Khan, Additional Director of Education, told Dawn.

“There is only one room for 465 students in the Kuchlak area of Quetta district — the school premises comprises one room and while all enrolled children must be accommodated it is hardly possible to do so. So a majority of them are given lessons in open air,” Bareech tells Dawn, depicting a dark picture of the state of education in the provincial capital.

As per government’s policy, there has to be one teacher for at least 35 to 40 students. On the contrary, there is only one teacher for 106 students at the Government Boys’ Primary School in Ghabarg, a small village in Quetta district.

“All teachers want to serve in the city as opposed to the rural areas,” Ghulam Ali Baloch said.

The provincial government has allocated 24 per cent funds from its 2014 provincial budget for the education sector. This appears to be an improvement from 2013 when the Education Department failed to provide reading and writing materials to government-run schools across the province.

“Not a single blackboard was provided to any school,” Mujeeb Gharsheen, central leader of Government Teachers Association Balochistan, told Dawn.

For over a decade, the law and order situation in the province has been worsening and has forced a large number of teachers to flee from rural areas to other parts of the province, especially Quetta.

“A number of teachers have used political influence and have managed to get posted in the heart of Quetta rather than in and around its outskirts,” Niamatullah Khan said.

This has led to a situation where teachers are surplus in schools located in the upmarket areas of Quetta but are reluctant to teach in localities on its outskirts or in the villages in the district. Creating disparity between the urban and rural sections, this has only resulted in the compounding of problems of students.

A number of teachers with adequate qualifications either get themselves posted in Quetta city or owing to lack of incentives quit the profession altogether.

But while the situation is dire enough in rural areas of Quetta district, the picture is more grim as we move further and inside rural Balochistan. From primary to middle to high schools, the institutions fail to tackle the educational needs of the children residing in the province.

Sources in the education department have told Dawn that Balochistan currently has over 3,000 ghost schools with over 5,000 ghost teachers, further emphasising how corruption and political influence is at play in the province.

“We have not been able to ensure the presence of teachers employed in schools across Balochistan,” Sardar Raza Muhammad Bareech, Advisor to Chief Minister on Education, said.

Unlike previous governments that have governed Balochistan, the nationalists-led coalition government has allocated substantial funds for the education and health sectors. And Chief Minister Balochistan Dr Abdul Malik Baloch has repeatedly stated that his government’s topmost priority is to ensure the enrollment of the 2.3 million out-of-school children into schools.

But while the chief minister has shown concern over fewer children in schools, poor governance has remained a stumbling block in the implementation of the government’s decisions with regard to development of the province in the education sector.

Republished in The Balochistan Point on 8th September, 2014.