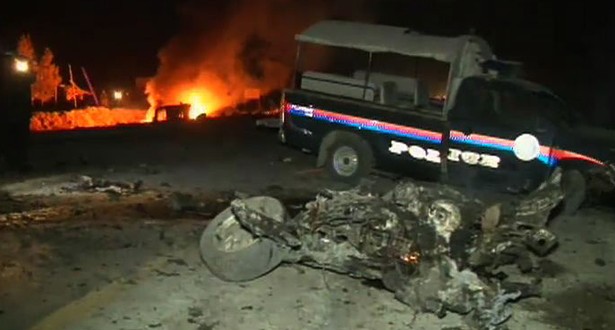 Editorial: 2014 begins with attack on Shia Community in Balochistan

The new year 2014 began   with a terror act in Balochistan, when a suicide car  bomb attack targeted   a passenger bus of Shia Pilgrims on Wednesday. At least two people were killed and 26 others injured in the attack according to the sources the bus, being escorted by a police van, was attacked in Akhterabad area of Quetta. The injured included women, children and four security personnel. The bus was coming from Iran. Gunshots were also fired after the bomb attack, as unidentified culprits opened aerial fire at the scene while the bus burned completely to ashes. According to the Bomb Disposal Squad, around 100 kilograms of explosive material were used in the bombing.

Apart from Baloch insurgency and ruthless “Abduct, Kill and dump” of Baloch youth, Balochistan is also marked for systematic killing of Hazara community on the bases of sectarianism.   Recently on November 1, 2013, six coalminers belonging to the Hazara Shia community were gunned down near Machh town, in Bolan district. The banned outfit Jaish-ul-Islam claimed responsibility for the attack in which one miner was injured. Regardless of government claims, November 2013 remained bloody month for the Hazaras.

In the attacks on Shia in 2013, more than 325 people have been killed and some seven hundred injured. The dead ones include women, children, policemen and most of the people belonged to Hazara Shia community.

2013 remained deadly year for the Hazaras. On 10th January 2013, a suicide attack killed at least 115 people and a total of 270 were wounded and in February a car bomb near Quetta killed 73 and wounded at least 180 people.  According to the Human Rights Commission of Pakistan in 2012,  “Hazaras have been uprooted from Loralai, Machh and Zhob (small towns in Balochistan province around Quetta city) and over 800 had been killed since 1999 and at least 550 Hazaras have been killed from February 2008 until May 2012.For the last five years, more than 50,000 Hazaras especially youngsters have left Quetta city, majority of them have managed to take refuge in other countries and nearly 300 lost their lives off shores of Australia when the boats capsized.”

It is clear that the Hazaras are not protected and exist in a precarious situation. That Hazaras have been living in Pakistan since the 19th century. The Hazaras are mainly Shiite Muslims in the Sunni-dominated area of Quetta, the capital city of Balochistan. Although the United Nations, Amnesty International and Human Rights Watch have reported on the systematic killing of the Hazaras, no notable developments have improved their security.  The Hazaras hold responsible the security forces that fail to routinely protect them.

After every attack on Hazars, high-alert security is claimed but the systematic killing takes place again very smoothly, claiming loss of human lives in large number. It is beyond one’s understanding why this population being close to Quetta Cantonment and security alert areas, is killed without any hindrance. Hazaras hold the security forces responsible for failing to protect them; however, some of them say that the institutions have not failed rather they lack the intention to protect Hazaras from the terrorists.

It is time for the central government to take the crimes against the Hazaras seriously and offer as much security as needed to protect this vulnerable ethnic group.

Published in The  Balochistan Point on  January 3,2014

2014-01-03
admin
Previous: Role of Media in Balochistan
Next: US withdrawal from Afghanistan and its implications on Pakistan