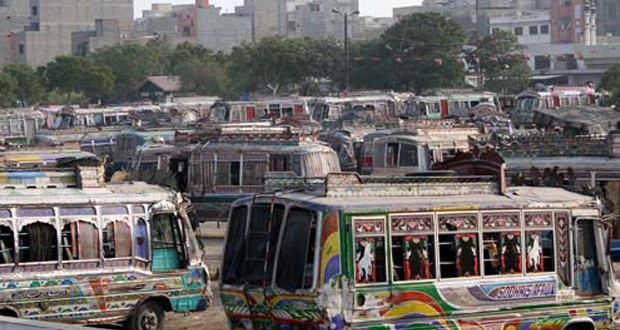 Quetta is the capital of Balochistan and the only metropolitan city of the province. People from all corners of Balochistan visit Quetta for official business, treatment in hospitals and shopping. Bus services from all the districts of Balochistan transport passengers to Quetta on daily basis. Buses from Baloch belt are parked at a make-shift bus stand in Musa colony on Sariab Road. Pashtun belt buses are parked at a similar make-shift arrangement on Spiny road. In 1990s, idea of a bus stand out of Quetta city in Hazar Ganji areas was floated. A bus stand was constructed but it failed due to lack of proper connecting transport facilities with Quetta city. Now, again efforts are being made to shift the bus stands of Quetta to Hazar Ganji.

Hazar Ganji is a place located 32 KM from away from center of Quetta city. When this place was used as a Bus Stand, it caused a great deal of inconvenience to the passengers from entire Baloch belt. Passengers used to pay hundreds of rupees as fare to come to Quetta but they were dropped at Hazar Ganji. In order to reach center of the city, which is the obvious destination of commuters, further expenditure were required on other means of transportation such as auto-rickshaws. Bus service that connects Hazar Ganji with Quetta city is very poor in quality and that can’t be used for the purpose. As a result passengers had to pay hundreds of rupees additionally to reach Quetta city and return back to Hazar Ganji for the return trip back home. Increase in travel costs reduced their visits to Quetta and hence their living standard decreased as a result.

As expected, the decision was met with severe opposition and since then the decision has been delayed more than once. At the moment, Dr. Malik has formed a committee which will give an opinion about the feasibility of the shifting of bus stands to Hazar Ganji. Union of traders are intensifying their lobbying efforts to persuade government to take action against the interests of common people and shift the bus stands out of Quetta city in Hazar Ganji. Based on its track record, it’s less likely that Dr. Malik government will care for interests of common people.

Normally, Bus stands are located out of city in all developed and planned cities of the world. However that requires a connecting transport system that connects those bus stands with center of city. Unfortunately, that sort of transport system is missing in the case of Quetta. State of intra-city bus service is so abysmal that it can’t be overhauled overnights. In other words no short term solution can be envisaged that would allow people to commute conveniently, back and forth, between Quetta and Hazar Ganji.

As per the announcement of Prime Minister Nawaz Sharif, Dr. Malik only has 10 months in office before PML-N takes over the office. Since coming into power, Dr. Malik and team has miserably failed in providing relief to people of Balochistan. Some disgruntled citizens even go to the extent of calling Dr. Malik government worse than that of Nawab Aslam Raisani. Dr. Malik should avoid taking any step which would earn him more infamy. One of such steps is relocation of Bus stands to Hazar Ganji. Dr. Malik should order establishment of permanent bus stands inside the city so that the spectre of Hazar Ganji bus stand can be buried forever. This will provide much need relief to people of Balochistan who have numerous other grievances.