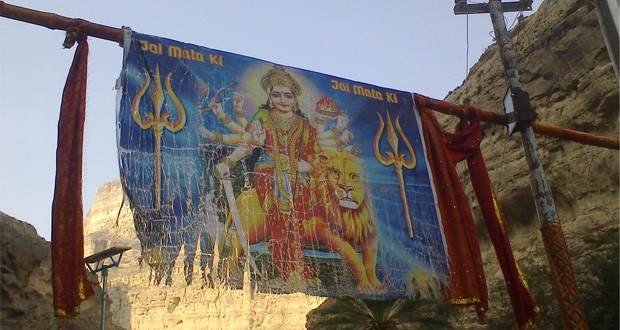 I awoke up early in the morning for my journey to Balochistan.  After bathing, I collected all my important supplies and travelled 260 kilometers.  Hinglaj Mata is a famous national park in Hingol.  Its real name is Agor and is located 200 kilometers from Ormara & 260 kilometers from Karachi.  Hingol is one of the biggest national parks in Balochistan and it’s also a very large river.  Previously there was a big Pakistan Army check post located at the site, but has since been shifted to Lyari near Uthal, Zero Point.

According to the Hindu religion, Hinglaj Mata is the name of Mata Parvati, the wife of Mahadev (Shiva).  I asked a priest why this place is important to Hindus, he told me that Mata Parvati and her sister lived there for 8 months during their travels and that most Balochistan residents know the site as Nani Mandir.  Along with a few friends, we travelled for Nani Mandir and met a few people along the way.  Among those we met was a very nice young priest named Raju belonging to the Karachi Clifton.  We talked as friends for about a half hour about Nani Mata, Shiva Ji, Diwali, and Holi.

We reached Nani Mandir on December 31 2014, the last day of the year; and to our surprise there were a lot of people.  I asked Raju about this and he told me that every year on the last day of the year many people arrive in cars, bus and vans.  I asked one of the visitors, “where he was from?” and he replied he has travelled a very far distance from Tharparkar to Hingol to pray at the temple.  The temple was already full, so we sat with Raju a while and agreed to meet the next morning.

The next day, January 1 2015, we had a slightly cold breakfast and sat in the sunlight a while.  I then returned to the temple to look for Raju.  When I was unable to find him, I asked another priest where he was and he told me Raju went to sit in the Kali Mata Tample, which was near where we were staying.  Upon arriving at the Kali Mata Temple, I was glad to find Raju there.  Since there were many people visiting the temple, I waited a while until Raju was free.  Afterwards Raju sat with me again and answered a few more of my questions.

I first asked Raju about Diwali to which he replied that Diwali was our biggest festival, much like Eid.  He’s said we celebrated Diwali for our Bhagwan Rama, because Rama went into Banwas or Exile in the forest for 14 years.  After 14 years of exile, Rama Bhagwan returned from the forest.  The People rejoiced upon the return of Rama and Celebrated a Diwali to mark his return from exile.

Next I asked about Holi.  Raju explained that Holi Diwali was for Mata Seetha.  Raju said that on the 5 of April is the Festival of Higlaj Mata.  On this day the Indian people come and from the Indian Assembly members also visit the Nani Mata.  Raju also told me that Indian people hope to see the Nani Mander.  If they see Nani Mander once, they return every year to this beautiful place.  I told him that I too hope to return next year.

I was impressed with Raju’s knowledge of Hindu history, and was honored to accept the information he taught.  Raju said that if someone really wants to learn about Hinduism and our Baghwan, they may go to the Karachi temples like Clifton and there you will find the Bhagavat Ghita and all their religious history.  I was fascinated by this idea, and wished I had more time to talk further with him but had to return home.

I am very thankful to Raju for his cooperation and helpfulness.  Mr. Raju and I exchanged numbers and have become good friends.  I then began my 6 hour journey home, from the beautiful Hingol Hinglaj Mata.  I enjoyed this journey and learned more about Hindu religion, an experience I will never forget.

Published in The Balochistan Point on February 18, 2015