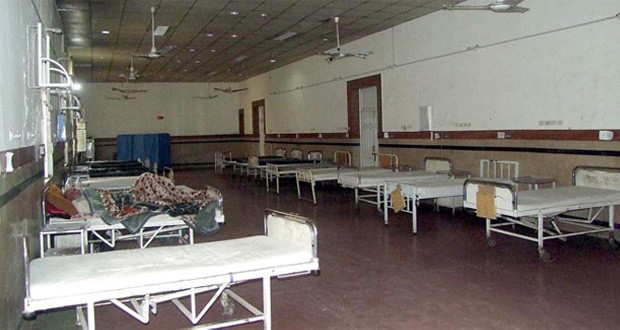 The Health Sector of Pakistan is managed jointly by the Federal Ministry of Health and Provincial Health Ministry of respective province. Constitutionally Health is a devolved subject under the Constitution (Eighteenth Amendment) Act, 2010 promulgated on April 19, 2010. Under these legislative amendments provinces have the right to run their health sector independently of the Federal Government, however, devolution of this key Ministry is still not done.

Provincially the Health Department aims to provide efficient delivery of key health services to the people of Balochistan through hospitals in each district headquarter. It also operates Basic Health Units (BHU) and Rural Health Centers (RHC) for providing basic health facilities at urban and rural level, respectively. The Health Department currently has 553 BHU’s and 89 RHC’s while it also operates 89 Maternal Child Health Care Centers (MCH) to provide health services to the vast and scattered population of the province. The Provincial Headquarter Quetta has five hospitals namely; Bolan Medical College (BMC), Civil Hospital, Fatima Jinnah Chest & General Hospital, Helper’s Eyes Hospital and Sheikh Khalifah Bin Zayed Hospital. The management of BHU is under the control of People’s Primary Healthcare Initiative (PPHI) which is a semi-government organization. There are also 567 Civil Dispensaries (CDs) for the province.

The Health Sector displays a very dismal state in Balochistan. Whether it is Doctor to Patient Ratio (1:1000) or Nurse to Patient Ratios (1:50) in Pakistan, it reflects a dim and grave situation. In case of Balochistan these ratios are worse than the said figures. Talking of Balochistan, 11 million kids died before reaching the age of five. Maternal Mortality Rate (MMR) is alarming with 785/100,000 live births while Infant Mortality Rate (IMR) is 97/1000 live births. In rural areas of Balochistan health services are at lower ebb and the state of hospitals, RHCs, BHUs are never encouraging as Health Management Information System backs this statement.

District Headquarter Hospitals in Naseerabad, Sibi, Khuzdar, Kech and Loralai have specialists but they lack medicine and equipment. The Patients of these hospitals are regular visitors of private hospitals in Karachi, Quetta and Punjab. Even the BMC and Civil hospital at Quetta are below par in terms of service delivery. MRI machines in BMC are non-functional for last 5 years.

The Provincial Headquarter Quetta also reflects the same scenario as its five major hospitals are under the heavy influx of Afghan immigrants. On the other hand private health sector is driven by profit orientation and they regularly violate the spirit of social welfare.

When the provincial headquarter is in such dismal state then rural distant areas will be much worse than this. A total of 23 hospitals are being operated in different districts of Balochistan but they lack efficiency and service delivery. It is shocking to learn that Jhal Magsi and Washuk District Headquarter hospitals are functional in RHCs and most of the times patient’s visit to these hospitals are futile. Either the doctors or medicines are missing. Lack of transport facilities makes the mobility of serious patients difficult and thereby resulting in fatal deaths.

The MCH and RHC are politically influenced in Balochistan and of no use to public. The RHC in Tehsil Gandawah of Jhal Magsi is the prime example as it is constructed in area where no drinking water is available. On other hand RHC Mashkay was functional before 2013 earthquake now its building is collapsed but the staff is being paid and exchequer is bearing the cost. RHC in Mirwah Naseerabad, Bagh, Mithari and Kot Raisani in Kachhi Bolan, Kohlu, Dera Bugti, Kalat, Sherani, Musakhail along with other 89 MCH centers and RHC services are not on the satisfactory side either.

Most of the non-functional BHU’s were made functional by PPHI and grants were issued for its repair and provision of equipment. Medicines are provided monthly on the basis of Daily OPD and HMIS report.  Still the doctors are reluctant to work in periphery and skilled paramedics are missing. To overcome these issues PPHI have raised the incentive of doctors and paramedics for health services. Absenteeism in BHU in recent year is rising and services provision is diminishing due to financial constraints. Monitoring mechanism of PPHI needs to be reviewed so as to improve service delivery.

Most of CDs are non-functional. This is due to the non-supply of medicine on time by District Health Officer Medical Store. The medicine provided is mostly less than the worth of Rs. 9,000. Sometimes this medicine is supplied after 3 months which cannot assure the delivery of health services. Condition of the CDs is worse and a policy was framed to convert the CDs to BHUs but at being not feasible implementation stage due to political, financial and population factors.

Institutional capacity of Health department for producing skilled staff is the root of problem. Only one Medical college, Nursing College and Paramedics School are not enough to produce Doctors, Nurses and Paramedics for Balochistan. Moreover, three Nursing Schools, five Public health Schools and Mid-wife Schools also lack facilities to produce skilled workforce in health sector. In Balochistan Birth by Skilled birth Attendant is 18%, Birth facilities are 16% and 12-23 month fully vaccinated children are 16%.  Present government have diverted more resources towards improving health services but this can be improved only by improving governance, framing proper health policy and replacing traditional ad-hoc policy with modern technical one.

Postgraduate Medical Institute (PGMI), Quetta is closed for more than 5 years and diploma and degree program students are not enrolled whereas in 2013-2015 sessions, 43 students qualified PGMI exam in 8 different programs. This institute can add skilled and qualified professional in the field of medicine.  Postgraduate Medical Institute needs to be functional as huge amount is being paid in the head of salaries and other operational costs.

On research side the Institute of Public Health, Quetta (IPHQ) role is never satisfactory. On the basis of research and analysis of data, policies are framed to attain objective and priorities are set. IPHQ is a research institution but it has not published a single research paper. Strengthening IPH can accelerate research work and most of the diseases can then be cured in systemic way.

So there have been so many talks about the Millennium Development Goals (MDG’s) but the solution lies in the Capacity Building of Staff. It should offer the following:

Published in The Balochistan Point on February 18, 2015

Disclaimer: Views expressed in this article are those of the Author and The Balochistan Point not necessarily agree with them.