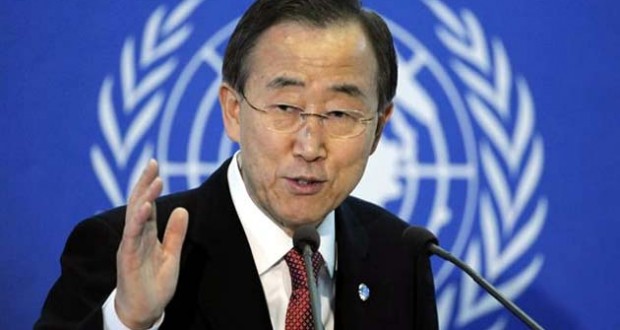 The United Nations Secretary-General Ban Ki-moon is in  Pakistan to attend Independence Day celebrations, promote education and disaster management as the monsoon season begins. While the Baloch Nationalist and social media activists are asking him to take notice of what they name it ‘Baloch Genocide’.

According to the UN deputy spokesman Eduardo del Buey that Ban will meet President Asif Ali Zardari and Prime Minister Nawaz Sharif and get an update on disaster risk reduction efforts.  United Nations Secretary-General Ban Ki is also going to highlight Pakistan’s role as one of the largest troop and police contributing countries to UN peacekeeping at the inauguration of the Center for International Peace and Stability.

The resources rich land and biggest province in terms of area ,Balochistan is in restive position. The Baloch nationalists with demands of independence, self termination have been striving since the amalgamation with Pakistan. While two or three political organizations demand provincial autonomy   for Baloch development. Furthermore, militant organizations are also in field for independent Balochistan. Apart from the military operations, the Baloch nationalists allege state agencies for forcefully disappearing and killing Baloch youth and political activists.

Considering the Baloch issue an International question, the Baloch nationalist parties and Baloch human rights activists are now seeking international attention for the dealing with matter. Therefore, the former opposition leader in the Balochistan Assembly Advocate Kachkol Ali on Monday appealed to the UN secretary general to take notice of “genocide of the Baloch nation and human rights abuse”. In his statement issued from Oslo, he said that “a human tragedy has occurred in Balochistan, thus, United Nations should take notice of it and take practical steps for its immediate end”. The Baloch leader justified his demand saying   “So far thousands of Baloch have been killed and their mutilated bodies were thrown away and thousands of people had been victims of forced disappearance.

The Baloch nationalist leader Hyrbyair Marri in a statement from London has also asked the UN and world community to  pressurize Pakistan to stop killing Baloch and give a time frame of peaceful withdrawal of its army from Balochistan.” The Baloch leader claims that their demands are within accepted democratic norms and international law.

On the arrival day of The United Nations Secretary-General the women members of Baloch National Front (BNF), a coalition of pro freedom Baloch nationalist organizations , carried out  a rally  in Turbat and held a protest in front of Turbat press club , appealing UN to take notice of Baloch genocide. On 14th August, the Baloch Human Rights Organization in its protest against torturing Baloch women in Turbat and murder of Baloch political activists urged United Nations Secretary-General to take notice against inhuman acts in opposition to Baloch people.

The hard stance of Baloch nationalists and their demands to United Nations illustrate the state of human rights violation on rise in Balochistan. No doubt, the series of atrocities carried out in Balochistan since 1948 have now compelled Baloch people to ask international intervention in Balochistan. The Nawaz government has also continued the same policies of Pervez Musharraf ‘s  dictatorship   and PPP government. It is time now the new government should make efforts to end human rights violation, mainly, the systematic killing and ‘Kill and dump’ of Baloch from all the walks of life. The state needs to normalize situation if she is interested to make ways for talk with Baloch militant groups and nationalist leadership.

Published in The Balochistan Point on August 14, 2013