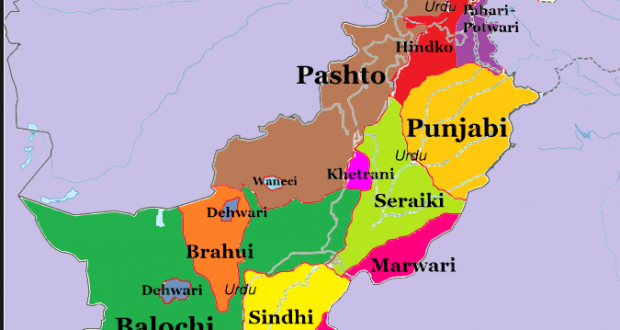 Last Wednesday a very regrettable development took place inside the parliament Building. The standing committee of National Assembly on Law and Justice rejected a bill moved by Ms. Marvi Memon. The bill demanded granting; Balochi, Brahvi, Balti, Pushto, Punjabi, Shina, Sindhi, Seraiki, Hindko and Urdu the status of National Languages. The bill has called for formation of National Language commission to develop standards for selection of more national languages in Future. This has been the demand of people of smaller provinces, especially Balochistan, from a long time. The bill was a great effort by PML-N MNA Marvi Memon but it was torpedoed by irresponsible members of the committee.

During the debate on the Bill, Special secretary of Law Mr. Raza Khan opposed the bill on the pretext that in past granting Bengali the status of National Language led to separation of East Pakistan. Nothing can be further from the truth in this case. Special secretary doesn’t know the correct history and he misguided the other members of committee who are more ignorant than secretary in knowing history. The fact is that in March 1948 Urdu was imposed as National Language of Pakistan and Bengalis opposed it from the outset. On 21st February 1952, at least 10 students were shot by police outside Dhaka University who were protesting against Imposition of Urdu as National Language. 21st February is observed as International Mother Language’s day every year by United Nations in remembrance of Bengali students killed in Dhaka. So, actually the imposition of Urdu as the only national language generated separatists sentiments in Bengalis in the first place.

Moreover, Language is an integral part of culture of any nationality. Pakistan is a multi-cultural society so there are many languages spoken in the country. Since 1948 Urdu is imposed on Pakistanis as their National Language. In 1948, only 3 percent people spoke Urdu as their mother tongue. Urdu was a language of North India and it should never have been imposed on a multi-cultural society like Pakistan. There are people who misguide others by claiming that Urdu as one language has kept the nation together. In India there are 22 official languages and these have made it stronger rather than weak. Similarly, granting the status of National Language to regional languages of Pakistan will also make Pakistan stronger but the policy makers fail to fathom this basic reality.

Professor Dr. Zafar Iqbal, Vice Chancellor of Federal Urdu University, in an absurd way termed this bill as an attempt to undermine Urdu. People like Mr. Zafar Iqbal have their vested interests associated with monopoly of Urdu as the only national language of Pakistan. The partisan view of people like Mr. Zafar Iqbal can’t be taken seriously in this context. Sardar Amjad Farooq Khosa, a PML-N MPA was the only person who voted in favor of this bill. Surprisingly, PPP which claims to be the champion of smaller provinces and provincial autonomy, voted against the bill.

Regional languages in Pakistan have been deprived of state patronage since 1947. All efforts have been made to make Urdu the only acceptable language in the country and that blunder has backfired. Majority of people in Pakistan prefer their mother tongues over Urdu and therefore granting them the status of National languages is the need of the hour. All those intellectuals, politicians and educationists who are opposing this move are biased in favor of Urdu due to one reason or the other. Pakistani people should use their thinking faculties in evaluating the usefulness of multiple national languages rather than digesting the propaganda spread in favor of Urdu. In the best interests of Pakistan all the aforementioned languages should be granted the status of National languages without further delay.

Published in The Balochistan Point on July 19th, 2014.