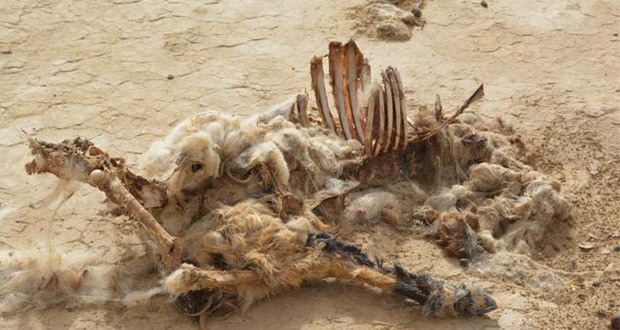 Balochistan is home to several problems and the most recent problem to have surfaced is a drought. Provincial Disaster Management Authority (PDMA) has stated that 29 out of 32 districts of Balochistan are facing drought conditions due to fewer rainfalls last year. The scale of the impact of this drought can be catastrophic for people living in rural areas of the province. Unfortunately, neither Balochistan government nor Pakistani media has given due attention to this grave problem.

According to statistics provided by the irrigational department of Balochistan, 80% of the farmland in Balochistan is rain-fed. When less rainfall takes place during a season then it reduces the quantity of agriculture production. These products include food items such as corn, wheat and hay which is consumed by livestock. Reduction in growth of these items not only results in food shortage for Humans but livestock also starves to death. This has been the case in Noshki district of Balochistan where approximately 25 percent of the livestock has died due to lack of sufficient fodder.

Balochistan experienced a severe drought from 1997 to 2005. That drought proved to be calamity and resulted in deaths of 1.76 million livestock. According to PDMA, Rs. 25 billion was the amount of estimated damages caused by the previous drought. People of the affected areas became victims of acute malnutrition and it resulted in several deaths.

Interestingly, Agriculture is the source of livelihood for 80% people in the province. A drought would effectively destroy the economic backbone of the province. The prices of important food items would soar up and there would be a shortage of food, especially in rural areas. Death of livestock would result in increasing the prices of meat and milk multifold and that in turn will generate an excessive inflation in the province. Economically, people of Balochistan general are not doing well at the moment but after this drought poverty will further rise and so would the social evils and violence. In short, if relief operations are not conducted on time, Balochistan is all set to drift into a major catastrophic crisis of mythical proportions.

Unfortunately, disaster management and planning bodies of the Balochistan didn’t make any preparations for a new drought. As a result, PDMA is ill-equipped and under-prepared to conduct a timely need-assessment of the possible damage let alone conducting relief operations. Government of Balochistan announced Rs. 1 billion for Need assessment and emergency relief for drought victims. So far, not a single penny has been used for helping the drought victims of Balochistan. Negligence of PDMA and indifference of Balochistan government is compounding the problem that people face in the form of forthcoming devastating drought.

This issue is extremely critical in nature and requires the foremost attention of the provincial and federal governments. Balochistan government in aid with federal government should immediately release funds for the drought victims. Need assessment of the Drought affected areas should be completed on war footings and relief activities started right away. Government should provide subsidized fodder to the cattle owners so that livestock in millions can be prevented from perishing. Medical teams should be sent to the affected regions for treatment of humans as well as cattle. These steps to some extent can minimize the impact of possible damage that would be caused by this drought.

The aforementioned steps can be useful in reducing the impact of drought but it’s only a short term solution. Next year if there are fewer rainfalls again, then all problems will re-emerge. There needs to be a permanent solution for this problem. Firstly, government needs to build dams where rain water can be stored. This will help in raising the water table and preventing a drought like situation. Federal government has announced to allocate Rs. 30 Billion for dams in Balochistan. Based on past experience, it’s less likely that dams would be constructed on time and in proper way. Construction would be delayed by years and poor quality construction material would be used due to commission mafia prevalent in Balochistan. Therefore, a separate oversight mechanism should be developed before commencement of work on these dams. These dams should be treated as extraordinary projects due to the purpose that they will serve.

Improvement in the capacity of disaster management setup of Balochistan is the second thing that should be done. PDMA should be restructured and given the status of semi-autonomous institute. This can help in getting out of the shackles of corrupt bureaucratic structure of the province. Apart from that PDMA needs to improve its capacity to conduct need assessment and carry out relief operations. These steps can’t be done overnights and therefore require political commitment and priority.

Unfortunately, Dr. Malik government has proved its inability more than once to show political resolve. Rather than wasting precious resources on publicity stunts such as sports festivals, government needs to prioritize the issue of drought. Any minor negligence on the part of provincial government will result in severe humanitarian crisis that will have repercussions for entire region.