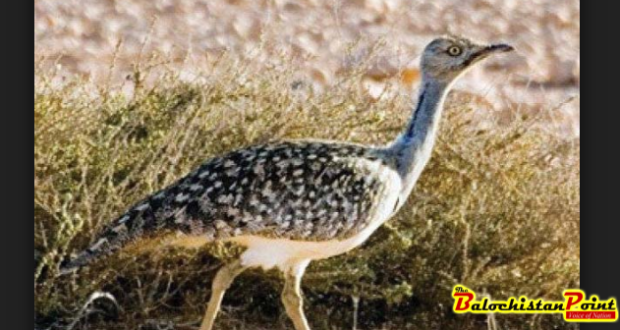 Endangered Houbara Bustard Likely to Become Extinct Due to Hunting

The Houbara Bustards which is also known as Mac Queen’s Bustard or Asian Bustard is commonly known all over the world especially in Pakistan, where it has already been placed in the endangered species list.

The Supreme Court of Pakistan struck down a permanent ban on the hunting of Houbara Bustards especially for Arabs in the past years. In the 1970s, the Houbara Bustards was, also abundant in the oil-rich Arab states but, unfortunately, the bird was hunted near-extinction because they (Arabs) think it contains an aphrodisiac. This is a myth that has no scientific explanation.

Not to forget the fact that the wealthy sheikhs often travel in every winter from the Gulfs for hunting the bird (Houbara Bustard ) by using falcons, dogs, guns etc in the provinces of Baluchistan, Sindh and southern Punjab. Consequently, a large number of vulnerable birds migrate from the freezing regions of Siberia to Pakistan, India and the rest of the world. For many in Pakistan, the bird namely Houbara Bustard has been emerging as a symbol of infirmity of the government.

To protect the bird, the government has to initiate projects that not only ban hunting completely but also help the bird’s preservation. For instance, in 1980, trophy hunting was introduced to save the national animal of Pakistan (Markhor). Generally, the range for hunting permits for Markhors was between USD 50,000 to 100,000. According to some figures compiled by the KP Wildlife Department, 80 percent of the amount generated by the sale of each permit is distributed to the local community, and the remaining 20 percent is spent for improving biodiversity.

It must be noticed that the results are surprising: the number of Markhors have actually increased from 275 in the early 1990 to over 3,500 in 2015. Moreover, A strict regulated system of sustainable hunting, is required under Pakistan’s international obligations. But we might yet save the bustards from completely dwindling from the country’s hills and deserts and every creature plays a part in the ecosystem. Preserve biodiversity and play your part to beautify the Earth.

Published in The Balochistan Point on April 20, 2018