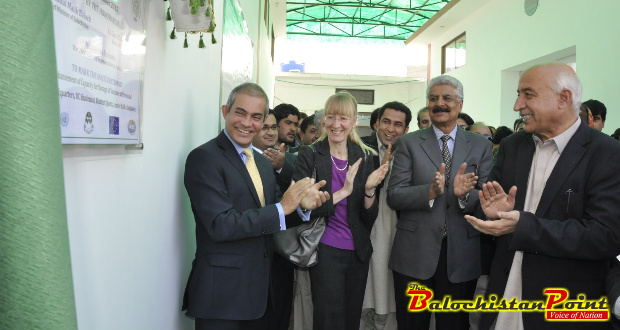 EU funded project for people with disabilities handed over to Balochistan

Quetta – Glad tidings for persons with disabilities in Balochistan as the province gets its first ever facility at the Orthopaedic, Prosthetic and Physiotherapy Centre (OPPC) that will provide free of cost quality prosthesis.  The existing OPPC has been upgraded and equipped with modern technology by the UN Refugee Agency (UNHCR), funded by the European Union under the Refugee Affected and Hosting Areas (RAHA) initiative.

Until recently, the OPPC was using old technology due to which the artificial limbs produced were of obsolete standard and painful for patients because of its weight and design.  With the modern technology in place, the number of people benefiting from the facility will increase by 50 percent. The project will benefit more than 12,000 people per year including Afghan refugees and their host community in the province.

Through another RAHA project, Balochistan also gets vaccines and an upgraded cold storage facility, with enhanced capacity to store larger quantity of vaccines and other medical supplies. This cold storage facility will enable the uninterrupted delivery of vaccines to the province through an Extended Programme for Immunization (EPI). The improved capacity and establishment of warehouse for the EPI will benefit approximately 636,436 children and women of reproductive age including 9,805 Afghan refugees in Balochistan throughout the year.

Speaking at the occasion, the Chief Minister of Balochistan, Abdul Malik Baloch lauded UNHCR, UNDP and the donor community for implementing important projects which will make positive impact in the lives of people. “Building capacity of the Social Welfare Department will enable them serve more deserving people and empower them to play constructive role in society, who are otherwise marginalised because of the physical challenges they face.”

Federal Minister Abdul Qadir Baloch said both the RAHA projects will bring significant changes. “Persons with disabilities need more care and attention.” The Minister said, that, the international community needs to continue supporting programmes like RAHA which promote coexistence between the Afghan refugees and Pakistani communities. He noted that at a time when many young Afghans are leaving seeking a better future in Europe the international community needs to do more to support Afghan refugees in host countries and enable voluntary repatriation in safety and dignity.

Representative UNHCR in Pakistan, Indrika Ratwatte said RAHA programme recognizes Pakistan’s longstanding hospitality towards refugees. Mr Ratwatte added, that, “Pakistan is a remarkable example of humanitarian coexistence between the refugees and their host communities. Being host to the world’s largest refugee community for decades, refugees and locals have shared resources and services and the RAHA programs is an important way to demonstrate burden sharing by the international community by rehabilitating and building capacity to serve both Pakistani host communities and Afghan refugees,” he said.

RAHA initiative is aimed at supporting refugee hosting communities across Pakistan through providing them with quality services in the sectors of health, education, water and sanitation and livelihoods across the country.

Balochistan hosts around 290,000 registered Afghan refugees, the majority of whom live in urban settlements alongside their Pakistani hosts. Under the RAHA initiative, UNHCR, the Commissionerate for Afghan Refugee Office in Balochistan and partners agencies have, so far, implemented 230 projects worth USD 22.3 million in nine districts.

Since the start of the RAHA program in Pakistan  in 2009 till to date, some 3,500 RAHA projects have been implemented across Pakistan benefiting approximately 10.6 million people of which, overall around 11 per cent are Afghan refugees whilst 89 per cent have been Pakistani citizens in refugee hosting areas. The total value of RAHA programs so far is over USD175 million.

Published in The Balochistan Point on December 7, 2015

2015-12-07
Editor
Previous: Noble Laureate, Tawakkol calls on Women to Play their role for Promotion of Peace Injustice, and Freedom of Expression
Next: Two Local Leaders of National Party Killed in Grasha area of Khuzdar