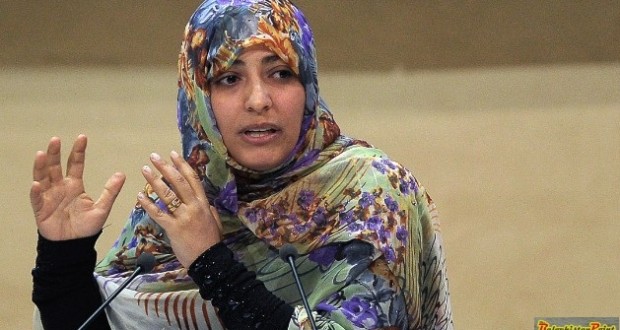 Noble Laureate, Tawakkol calls on Women to Play their role for Promotion of Peace Injustice, and Freedom of Expression

Turbat :  The world’s  prominent Noble Laureate,Tawakkol  Abdel- Salam  Karman  has called  on the women  to play  their  protective wholehearted  role  for promotion  of peace , rule of law  and injustice, democracy and freedom of expression as well raising voice  against  corruption, crudity , injustice , ignorance and poverty.

She was addressing   the conference via video link at Turbat University the other day.  The video link conference was cooperatively organized by the COMSAT institute oftechnology, Islamabad   and Inter-University Consortium forpromotion of social sciences in Pakistan.

Tawakkol Karman was awarded the Nobel Peace Prize in 2011 in gratitude of her work in diplomatic struggle for the protection of women and for women’s privileges to full participation in peacebuilding work in Yemen. Upon being awarded the prestigious prize, Tawakkol became the first Yemeni, the first Arab woman, and thesecond Muslim woman to win a Nobel Peace Prize, as well as the youngest Nobel Peace Laureate to date, at the age of 32.

Karman is a human rights activist, journalist, politician, and senior member of the Al-Islah political party.

Addressing the video managed conference session, she stressed that the government, institutionsandpolitical partiesrobustly need to ensure dynamicparticipation of the women in every field of life.

“We have been marginalized for a long time  and now it is the meticulous time for women to stand up andbecome sufficiently energetic without requiring toask approval or acceptance from any.” she addressed the conference via video link ceremony.

It was a sporadic opportunity for the faculty and teachers of the University to listen to the Nobel Laureate Tawakkol Abdel- Salam Karman.

The Pro-Vice Chancellor of Turbat University, Professor Dr. Abdul Saboor Baloch applauded theoutstanding efforts of the administrator staff of IT Section on conducting successfully the video link conferencing in the University.

He also praised courage of faculty members and teachers in this regard, who demonstrated prodigious interest in the lecture session.

Turbat , where the literacy rate of the female is furiously less and to make an environment that boosts up the potentialities of the female students to encourage other, can be seen protective talking Tawakkol Karamn is an example of inspiration.

Published in The Balochistan Point on December 6, 2015

2015-12-06
admin
Previous: Among the Major Issues, Traffic is the Biggest Problem of Quetta: Dr. Kaleemullah Kakar
Next: EU funded project for people with disabilities handed over to Balochistan