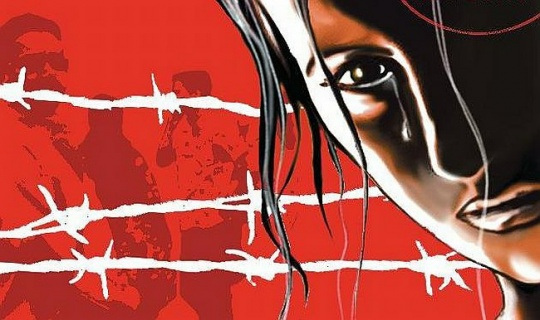 Family of rape victims mourn on this Eid

On 6th December last year, two girls of Kalat, Thirteen year old Asiya and nine year old Nazia were seen by their family for the last time. The two innocent girls were kidnapped, raped, murdered and then their bodies dumped. The family of Asiya and Nazia will be mourning while other will be celebrating Eid-ul-Fitr. The unfortunate family still awaits justice as the savages responsible for rape-murder for their girls have not been apprehended even eight months after the incident.

According to sources, the teen-aged girls were allegedly kidnapped on their way to hospital on 6th December last year. They were brutally raped for more than a week and once the barbarian kidnappers were done with them they were killed and their dead bodies dumped on a roadside on Sheikharhi area of Kalat.

This was the first time in the history of Balochistan when two young girls were victimized in such a brutal way. The Baloch society reveres female and hurting women is a notion alien to the Baloch society let alone raping and murdering teenage girls. The reason that the culprits are still at large is due to the fact that they belong from powerful families and law enforcement agencies can’t dare to put their hands on them. However on the protest and pressure of political parties, affected family and masses of Kalat one of the murderers was arrested.  However a sense of anxiety prevails among the victim family as they fear that the alleged murderer will get away with the heinous crime.

Adding insult to injury, trial of the arrested person has not started yet. Notwithstanding the fact that Police and district administration know the whereabouts of the culprits, they have closed their eyes off the incident. The Police and district administration, instead of arresting the murderers, have been trying to pressurize the victim family to withdraw their case as they seem helpless in front of the murderers who belong to way too much powerful families.

Chief Minister Balochistan Dr. Abdul Malik Baloch and his finance advisor and Member of Balochistan Assembly from Kalat, Mir Khalid Langove assured the families that criminals of that heinous crime will be brought to book. However, just like their other claims this one also proved to be a mere rhetoric. Failure of government of Dr. Malik is not a secret any more and the incompetence of the Chief Minister has proving catastrophic for the already marginalized people of Balochistan.

It is high time government should arrest the culprits and provide justice to the victim family. Dr. Malik and all of his cronies should consider themselves on the place of the victim family. Maybe this can make them realize the agony of the unfortunate family of the teenage girls. The more they ignore this issue the worse its consequences may be for the society at large. Apart from a long list of failures, Dr. Malik will be remembered as the Chief Minister who couldn’t arrest powerful rapists in Kalat if he didn’t intervene in this issue with full interest.

The Author is the Assistant Editor of The Balochistan Point.

Published in The Balochistan Point on July 29th, 2014.