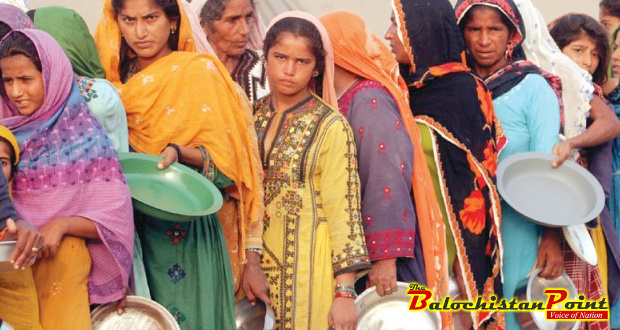 It has been long time that Balochistan is suffering from food insecurity problem. The Sustainable Development Policy Institute (SDPI) provided a data which estimates that 30 out of 32 districts of the province are food insecure which has been alarming issue. Shockingly, only two districts including Quetta and Jaffarabad have food security in the entire province. Most of the districts are depended on agriculture and it is the only source for the food, but this sector is completely destroyed due to shortage of water.

According to the experts, over 80 percent of the agriculture is depended on rain fed, but there has been less rain in last few year as it is required. The other problem is that there is lack of dam and rain water is completely being wasted just due to bad management. In only Khuzdar district 350,000 cusecs of water are dumped through rivers in Arabian sea.

In recent years, not a single large dam has been built in Balochistan to save the rain water for the agriculture due to which water table is falling sharply. The agriculture land is depended on water supplied by the tube wells which requires electricity. But the rural areas of the province just get  5 to 6 hours electricity in a day, so how they can maintain the agriculture land. This is the only reason that the problem of food insecurity is increasing rapidly in the province.

The drought is affected the people and the livestock. The most dangerous drought in Balochistan occurred during the period of 1997 to 2005. This killed over 1.76 million cattle and an area of 0.798 million hectares were wasted which became the loss of 25 billion. The problem can be more dangerous as the effect of drought can be much greater due to the increasing population and lack of attention from the government side.

Government is also the responsible of food insecurity then why government is silent and not paying any attention to resolve this ongoing problem. The former Chief Minister of Balochistan Dr Abdul Malik declared a package of 1 billion to be utilized for the drought victims. But since that not a single rupee has been spent on them. These things raised questions, where these funds are going? Why these funds are not being given to the poor people? Till when they should suffer from these problems? Unless the government will not be serious about this alarming issue nothing can be done and the drought victim will fever feel protection and they will continue to suffer from food insecurity.

Published in The Balochistan Point on August 25, 2018

2018-08-25
admin
Previous: Requisites of the welfare state
Next: Career Pathways – Paving their way to a U.S. Education