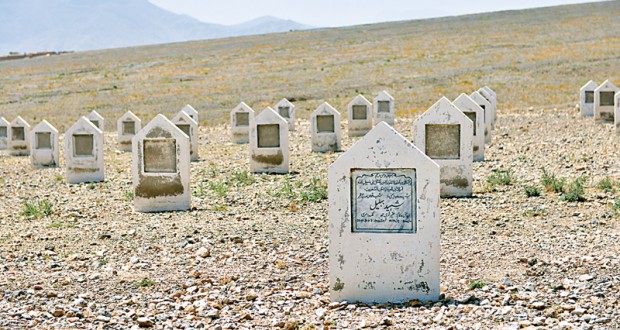 Footprints: Shrine to the Disappeared

IT couldn’t be more ironic. As we enter Marri Camp, near Shalkot — an area outside Quetta playing host to an estimated 100,000 members of the Marri tribe — songs lauding the land that is Pakistan start playing on the radio. At a nearby peak, flags installed by the separatists fly high. A feeling of being completely unwelcome follows.

Mud houses — some intact, some caving in due to continuing search operations or plain neglect — can be seen. As the song continues our car swerves on the dirt path leading towards the final resting place of the Marri chieftain, Khair Baksh Marri. What was earlier a bare graveyard is now under a tent, surrounded by carpets, and equipped with a solar panel and a water cooler. In the middle is a graveyard with flags of independent Balochistan flying above, most of them handmade, and on the right of the rugged plain white plaques are installed row after row.

Some of the plaques carry in Balochi the names of those who have disappeared over the years. Each has a name of the missing person, his tribe, date of birth, date of disappearance and of recovery (if someone is found, that is) inscribed in black. Other plaques are blank, waiting to be inscribed, I am curtly informed.

Most people, the majority of them men, refuse to speak. Those who do, speak in monosyllables. Two months have passed since the memorial was rebuilt. It was destroyed by the Frontier Corps a few days after it was built three months back. “They didn’t want this place to turn into a mazaar [shrine],” says a journalist speaking on the condition of anonymity. “But that’s exactly what happened soon after the Marri chieftain passed away and he was laid to rest here. People want to know where the disappeared are. Many know the answer, but are too scared to articulate it.”

When it comes to the disappeared of Balochistan, the answers are very few. Seven months ago, a shepherd found “bones lying around a mound in Tootak”. Though a judicial tribunal was formed on Feb 1 by the provincial government and Balochistan High Court judge Noor Mohammad Meskanzai went to investigate the graves as head of the tribunal, the findings of the report are still awaited. It was reported a few weeks ago that the report had been given to the chief minister of Balochistan and a decision on whether or not to make the report public would be made after his visit from abroad. Now, it is said the report is sealed and will be made public after the permission of the Supreme Court that took suo motu notice of the case earlier this year.

“This report will never come to the fore,” says a high court lawyer who is not authorised to speak to the media because he accompanied the tribunal during the judicial inquiry. “It is similar to the Hamoodur Rehman Commission formed in 1972. The original report never came out, though there was public outcry and debate over the atrocities committed in what was formerly East Pakistan.” He added that most people who were part of the tribunal on mass graves “are either being sidelined or facing threats by some elements actively involved in disturbing the law and order of Balochistan. Since becoming a part of this commission, my phones are being tapped. And I have to constantly prove my loyalty to my country rather than my expertise as a lawyer.”

A few more bodies were found in March after the discovery of the graves in February. “We believed that an area that has been tampered with will reveal itself as a possible mass grave,” says the lawyer. “But a few of the graves we later found were in the ground that didn’t seem like it had been touched for years. This means the mass graves have not been a recent phenomenon. But who’d say that, without losing their life?”

Fighting for the recovery of the missing persons since 2009, after receiving his son’s mutilated body, Abdul Qadeer Baloch — better known as Mama Qadeer — holds a vigil at the press club every day. But this afternoon he wants to speak about a security guard that has been deputed outside his camp. “I don’t want to be killed by him,” he says. “I have been sitting here for years now, where was the security then, and why now?” Calming down a little eventually, he speaks about the report and says it will be published for sure. “When half of those responsible are settled abroad or retired or dead or no longer worthy of being protected.”

Republished in The Balochistan Point on 15 August 2014.

2014-08-15
Editor
Previous: Periodicals in Balochistan
Next: The Role of youth in the development of Balochistan