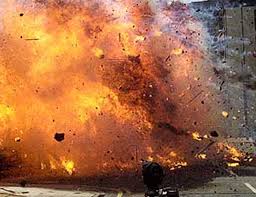 QUETTA: At least four were killed and 26 persons were injured including five Frontier Corps (FC) personnel in Balochistan’s restive Khuzdar city on Saturday.

According to the police sources, the militants targeted the vehicle of security forces through an improvised explosive device injuring 26 in Seerat Chowk area of Khuzdar.

“The vehicle of security forces slightly damaged in the attack and most of the victims were civilians,” police said.

The injured were rushed to the Civil Hospital Khuzdar for medical treatment. The condition of the six injured was critical.

Police and FC personnel reached the area of the blast to probe the incident.

There was no immediate claim of responsibility for the attack.

2014-07-19
admin
Previous: Health Policy for Balochistan…?
Next: Article 144 would be imposed for a day to ensure peace on Youm-i-Ali in Quetta: Home Secretary