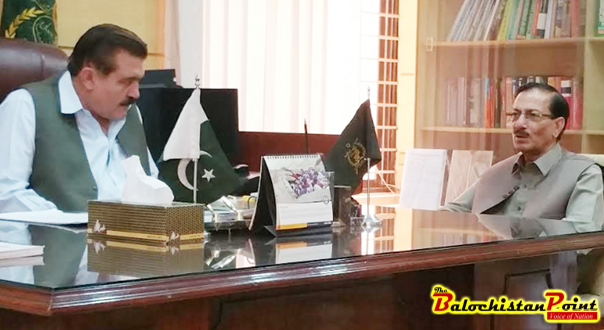 QUETTA: Free of cost justice to the common people is the mandate of Provincial Ombudsman secretariat, stated by Balochistan Mohtasib (Ombudsman) Abdul Ghani Khilji in a meeting with the GPP Team led by Mahfooz Ali Khan.

Coordinator GPP Mr. Mahfooz Ali khan while his meeting with the Provincial Ombudsman stated that the Strengthening of POS at divisional level for increasing effectiveness of service delivery through accountability and transparency is the mandate of GPP.

It’s our wish to facilitate citizens at maximum level” says Mr. Khilji, masses should be aware of the Ombudsman Office and its functions.

Newly appointed Ombudsman was given orientation about Project Development objectives, and the line departments which are the key focus of the project. Mr. Mahfooz Ali Khan mentioned that the proposed project aims to strengthen upstream (planning and financing) and downstream (service delivery) government systems.

The direct beneficiaries of the upstreamsupport will be the center-of-government departments, i.e., the Finance Department (FD), and the Planning & Development Department (P&DD), as well as the Balochistan Revenue Authority (BRA) and grievance redress institutions (Office of the Balochistan Ombudsman, Anti-Corruption Establishment).

He was also informed about the project focus on Increasing the effectiveness of grievance redress mechanisms and expanding outreach to citizens for the: (i) Office of the Balochistan Ombudsman – with a focus on resolving complaints related to education and irrigation in specific. Mr. Mahfooz Ali Khan mentioned the increased caseload of the Office of the Balochistan Ombudsman indicates growing citizens’ trust in the institution due to the extensive efforts of both Ombudsman Office and MDTF/World bank supported project GSP: incoming cases increased by 10 percent within two years after project interventions and support.

He further said that staff will build up their capacity and with the provision of IT support, the disposal of complaints will continue in a longer term.

Coordinator Governance and Policy Project Mahfooz Ali Khan said that GPP is focusing on increasing the effectiveness of grievance redress mechanisms and expanded outreach to citizens for the office of the Balochistan Ombudsman – with a focus on resolving complaints related to education and irrigation.

He further said that GPP may provide Judicial training to Investigation Officers and Office Management Training of staff will ameliorate the efficiency of Provincial Ombudsman Office.

A robust security system is the most critical factor for the Ombudsman Secretariat. Additionally, awareness of the function of this Office among the people will also be increased by mass awareness campaigns.

Published in The Balochistan Point on July 23, 2017

2017-07-22
admin
Previous: QUETTA: Doctors banned from private practice during duty hours
Next: Pakistan ranks at 70 among 144 countries for recognizing role of Women in Political Empowerment