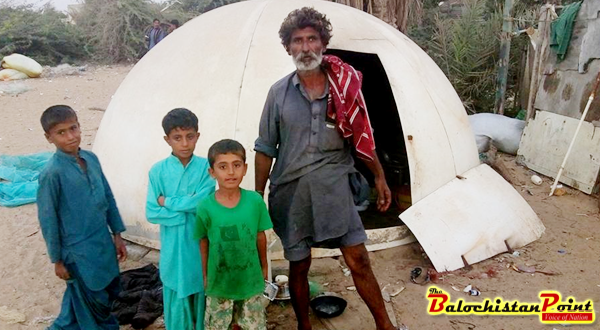 GADDANI: Sea erosion is a natural phenomenon that takes place along the coastal areas, causing loss of property and resulting hardships for the inhabitants.  Along the coast of Pakistan, Gaddani is also one of the affected areas by sea erosion. Sea erosion has submerged and  damaged houses of the poor fishermen, government owned buildings, religious places and a technical center in Gaddani city. It is likely to damage more areas and the houses close to the beach.

Gadani Beach is on the Arabian Sea located near the Hub River and Cape Monze in Gadani, Lasbela District of Balochistan. Gaddani is one of the Tehsils of district Lasbela, about 50 kilometers away from Karachi, Sindh. Most of the population at Gaddani consists of fishermen and the workerers of Ship breaking yard. Ship-breaking yard is located in Gadani. The yard consists of 132 ship-breaking plots located across a 10 km long beachfront at Gadani.

Some victims of sea erosion along with their family members are still living with no shelters,whose houses were washed away in 2016.  Muhammad Saleem 48, is one of the poor fishermen whose house was submerged last year. He said that he could not rebuild his house since he did not have any money. “Not to speak of rebuilding my home even we are worried about earning daily bread and butter, we thought government would assist us to construct a new house ,”Saleem said.

Saleem along with his wife and five children is living in a transient shelter, made of wood and plastic. Saleem’s wife told the Balochistan Point that they were passing through sever sufferings of the life. “My children have become sick in the winter. We do not have warm cloths and blankets for them.”

“We wanted our children read and make a prestigious status in society for them. We wanted them have books and uniforms but we are unable to feed them two times and given them a roof over their head,” she said sniveling.

Saleem’s wife is literate. She works as daily waged polio worker during the polio vaccination campaigns. “I requested MC Chairman to help us have a shelter where we live with no fear but unfortunately no one is willing to help us. I am worried about future of my children that how will they lead a life without any home and proper living way.” she added. 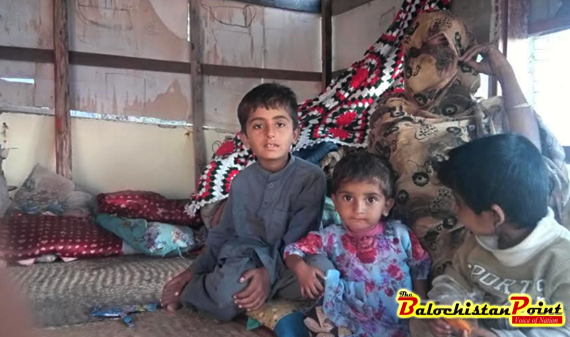 Saleem’s wife is expressing her sufferings with Balochistan Point.

She said: “We are looking for support towards elected representatives such as Jam Kamal Khan and Price Ahmed Ali and hope that they will assist us because we do not have any wealth to reconstruct our home.”

Another victim of sea erosion in Gaddani told the scribe on condition of anonymity that there had been imbalanced support to the affected people of natural calamities. “Once a financial support by Shipbreaking yards was paid to flood victims in Gaddani, whose houses or other properties had been damaged, unfortunately the assistance was based on nepotism and favoritism,” he added.

He said that neither the government owned buildings were repaired nor the victims of sea erosion paid any financial assistance, adding that the Chairman of Municipal Committee visited affected areas and assured the victims of aid but that was just for the purpose of photo session. 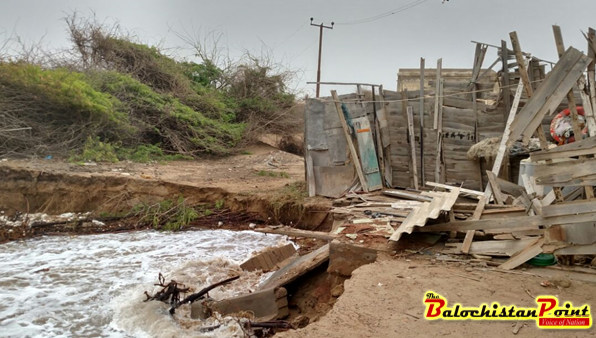 A view of sea erosion upheaval at Gaddani

However, Chairman Municipal Committee Gaddani Abdul Hameed Baloch says that for more than six years sea erosion has been upsetting people and their properties in Gaddani. “There are hundreds of people who have been displaced due to erosion upheaval but there has been no government assistance. Ship Breaking Yard and Fisheries department have no interest in the welfare of people in Gaddani,” told Abdul Hameed Baloch to The Balochistan Point.

In order to protect people and their properties, chairman Municipal Committee Hameed Baloch demanded authorities concerned to construct a sea wall in the required areas at Gaddani. “The construction of wall will save the population of 30000 from any destruction, particularly the major damages to houses and market of the area will not occur.

The Coastal Association for Research and Development (CARD), is a nonprofit local organization and it has been contributing great services in fisheries policies.  The CARD regarding sea erosion in Gaddani made policies and advocated local communities as to make people aware about natural disaster. The officials of CARD say that local communities became aware of strategies and approach to stakeholders, however, the organization could not implement those policies owing to, lack of access and resources.

CARD officials urge on protection and provision of shelter to the affected communities residing at Gaddani. Moreover, There is a great need of joint actions by non-government and government  organizations to  make policies for the people of Gaddani since  most sufferers  are poor do not have access to approach political representatives.

Published in The Balochistan Point on January 31, 2018

2018-01-31
admin
Previous: Earthquake tremors hit Lasbela and other parts of Pakistan
Next: Child abuse: Scene behind the scene