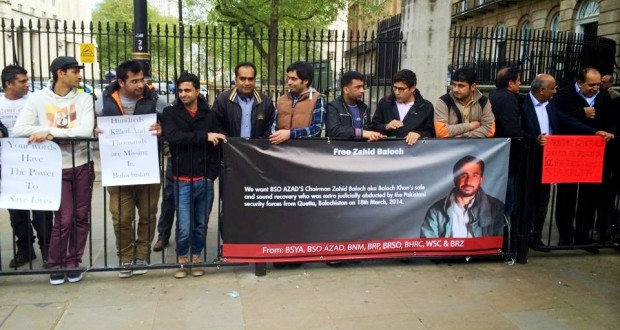 The protest was aimed to highlight the gross Human rights abuses in Balochistan being committed by state forces, such as enforced disappearances, extrajudicial killings and military operations Balochistan.

Baloch Student Organization Azad chairman Zahid Baloch was allegedly   abducted intelligence agencies in front of several activists of Zahid’s organization and they witnessed the forced abduction of their chairman.

“Military operations”, are the most violent activities which properly exist in Balochistan, particularly in Marri and Bugti areas. Around two dozens of people including innocent women and children were killed and abducted during uninterrupted army operations in Dera Bugti earlier this week.”  Said protesters

Baloch Republican Party during protest urged the United States of America, European Union and the United Nation to take immediate action to save lives of thousand Baloch missing persons and end Human Rights violation in Balochistan being perpetrated by Pakistan.