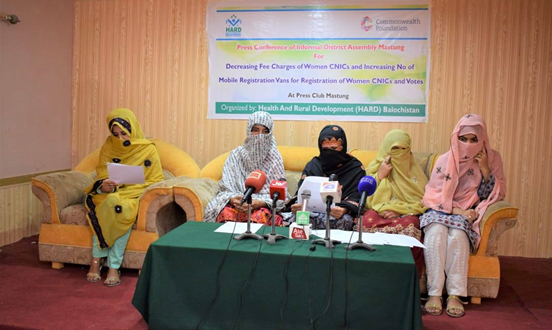 Today, we the members Informal Women Assembly of Health And Rural Development (HARD) Balochistan presenting this charter of demand in today’s press conference which has been developed after an extensive debate / consultative processes in our assembly sessions under the project “Strengthening Women Democratic Governance in Balochistan, Pakistan” being implemented with the financial support of the Commonwealth Foundation International (UK).

Dear Journalists, we really appreciate your contribution in highlighting and resolving public and women issues and thank you for your continuous support to the Civil Society Organizations/groups are struggling for the due rights and development of people particularly women and marginalized communities. In today’s press conference, we demand the provincial Government of Balochistan and other authorities/representatives;

Most vulnerable and marginalized families/households particularly female headed households, home based workers, transgender and People living with disabilities must be provided cash assistance and food package and essential supplies affected on account of lockdown and COVID-19.

Published in The Balochistan Point April 3, 2021