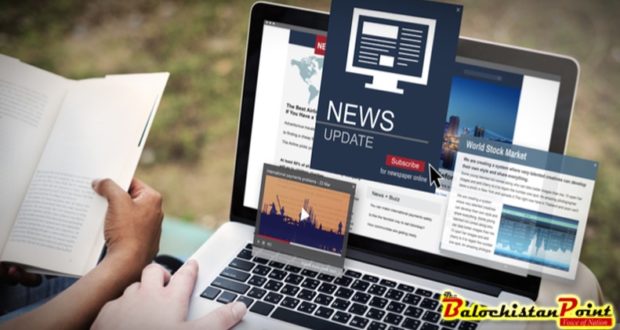 Although, Online Journalism in Balochistan has not yet developed enough, but it is not entirely absent in the lest deprived province either. However, Online journalism is a modern form of journalism where the information is brought to the people by the means of internet. As Balochistan’s youths are not well encouraged to work in Online Journalism yet; they do know the worth of it and some young journalists in the province are the real voices of the citizens through the help of Online media outlets; they have been highlighting the issues of the nation and its people boldly.

Ali Jan Maqsood, a writers based in Turbat, states, “The Online Newspapers of Balochistan are doing matchless jobs as they are the only sources for us to get our issues highlighted and bring them to public. On the other hand, many writers are being motivated when they get their write-ups published in them as most of the published reports are related to the province.”

Additionally, Adnan Amir, a young journalist and the former editor of Balochistan Point has launched Balochistan Voices and it has been a great source for highlighting the pros-and-cons of the province.

The online media organizations in Balochistan run voluntarily and there is need to regularize them.  The Editor-in-Chief of Balochistan Point Yousaf Ajab says, “Registering all the online newspapers of Balochistan, of all languages, would be a welcome step by the authorities concerned. Once registered, these media outlets would not only generate a further competitive atmosphere in the province but will also become source of employment for many youths in the province because the financial stability of online newspapers and share in the advertisement, will bring them be in a better position to hire reporters, editors, sub-editors and other staff to promote quality journalism in the province.”

The online newspapers spread social, educational, literary, economic and political news about Balochistan and they are the voice of the Baloch people and provide Baloch youth a platform to express their views and issues in English and Urdu languages so that the voice expands to a wider population.

Recently, in October 2018 a young female journalist Mariyam Suleman launched Balochistan Review an online newspaper through which a lot of issues are highlighted and it is the voice of voiceless people.

Thus, the role of online news websites, specifically in Balochistan, is a very bright step towards a very precious future since we get to numerous conclusions to the daily problems of Balochistan. For, when the local problems are discussed by the locals themselves, there approaches a suitable taste to tackle them soon with a government active enough to sort out the issues highlighted.

The writer is the student of law (LLB 5 years at the school of law university of Turbat and a regular contributor to Balochistan Point. He can be reached at munaj1gul@gmail.com

Published in The Balochistan Point on January 11, 2019