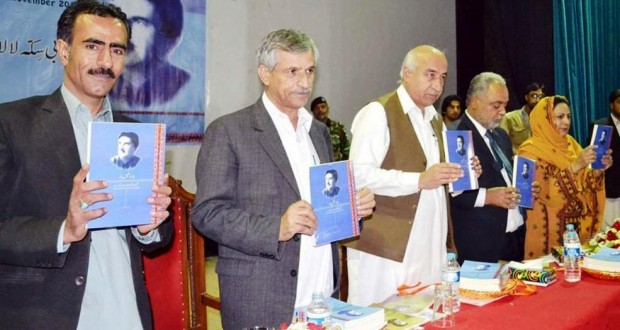 Quetta: The year 2014 has been declared as the year of Gul khan Naseer by the Chief Minister (CM) Dr. Abdul Malik Baloch at the beginning of the year. Therefore different programs are held in remembrance of Gul Khan Naseer by different literary forums such as Balochi Academy, Rasko Adabi Gall and the praiseworthy department of Balochi of University of Balochistan (UOB).

The formation of Gul Khan Naseer Chair in supervision of Balochi department in UOB is one of the most successful efforts after fatigued attempts of the departmental Ex- chairman Dr. Sabor Baloch and current Rahim Baksh Baloch. The approval of chair has been given in 2012 but later in this year it became functional.

On Saturday, A seminar was conducted in Gul Khan Naseer in UOB. The seminar conducted comprised of two sessions in auditorium Hall of University of Balochistan. The first phase was initiated with the recitation of Holy Quran’s verses and then the guests have been called on their seats to be seated. The guest of this gathering was Dr. Malik Baloch, the current CM of Balochistan and the other dignitaries were Pro-Vice Chancellor of university of Balochistan Mehrab Baloch, Dr. Shah Mohammad Marri, Novelist and the Ex- education sectary Munir Ahmed Badini and Rahim Baksh Baloch Chairman of the Balochi department.

The chairperson of Gul Khan Naseer chair Madam Nasreen Baloch began the session introducing the Chair to the guests and the audience present in hundreds. The books published contain the researches on life, politics and poetry of Gul Khan Naseer. A collection of songs, sung by the singer Haroon Shiekh, as well has been compiled in a form of CD was has been successfully released, stated the chairperson.

A huge number of students attended the program and before conclusion of first session the honorable Pro-VC Mehrab Baloch welcomed the CM and mentioned the problems that UOB is facing in accordance with finance. Pro-VC lamented that other provinces have increased their grants but UOB is in dilemma that how to carry out its functions by such a low sort of grant being allocated. He has requested the CM to increase the grant from provincial side. After which Dr. Malik Baloch thanked the chair calling him as the guest of Seminar and announced 1 Million Rupees more for the Chair to conduct researches on Gul Khan Naseer. At last the five books published by the Chair have been inaugurated by the CM and other dignitaries sitting on the stage. The books are as follows,

‘’ Har o Hesar’’, this is a novel written by Munir Ahmed Badani is all about the national legend Gul Khan Naseer.

The 2nd session began after a tea break and the guest of this was honorable Dr. Shah Mohammad Marri in which almost eight papers were read regarding poetry, political activities, life in prison, research works and vision that Gul Khan Naseer was having during the times he was alive .Those who read the papers include, Zahid Dashti, Waheed Amir, Waheed Zaheer, Ramzan Bamari, Shah Mohammad Marri, Yousuf Aziz Gichki and Saeed Kurd. In the concluding session the guests, teachers and students were specially thanked by team of Balochi Department and Gul Khan Naseer Chair.

Published in The Balochistan point on November 16, 2014

2014-11-16
Editor
Previous: ISIS Can Capture Balochistan Just Like Mosul: Warns Iranian Parliamentarian
Next: Issue Of Local Certificates In Mastung Disrupted Due To Negligence Of Bureaucracy