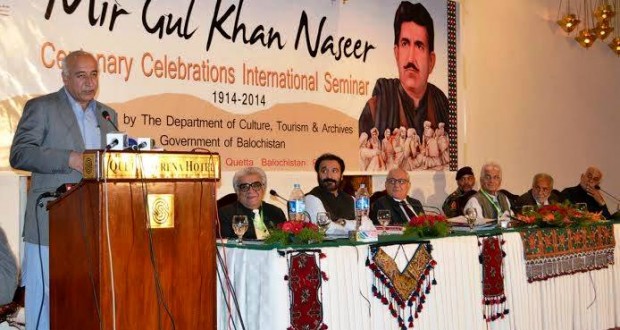 It was as usual the beginning of the tremendous Seminar has been initiated by a recitation of Holy Quran and Mir Mujeeb-Ur-Rehman Muhammad Hassani Minster for culture, tourism, Archives and Sports welcomed the guests. Later on Abdul Hakeem Baloch and Sattar Purdely addressed the keynotes and Honorable CM and Chief Guest of the session Governor of Balochistan Muhammad Khan Achakzai delivered their Speeches. Secretary for culture, tourism, Archives and Sports Aslam Shakir Baloch paid special heartfelt Thanks to the international and national guests and participants.

The first day of the seminar was accompanied by a musical concert which was hosted by Minster for culture, tourism, Archives and Sports..

Pro-Vice Chancellor, University of Turbat Dr. Saboor Baloch was the chairperson of the session. This was decorated by the speakers, Zia Ur Rehman Baloch, Kazuyuki Murayama, Hameed Baloch, Jabbar Khattak and Ahmad Salim Khawaja.

In this concluding plenary session the chairperson was Abdul Hakeem Baloch, former chief Secretary Government of Balochistan. The speakers read the papers regarding Gul Khan Nasser were Zar Jan, Karim Tahil, Hamid Ali Baloch, Dr.Syed Javid Haider, Prof. Dr. Abdul Saboor Baloch, Yousuf Gichki, B.M Kuttey, Zahid Dashti and Mujahid Brelvi. All of the plenaries overviews have been taken by the Session’s Chairpersons at the conclusion of each.

This concluding session was initiated by the recitation of Holy Quran. In this session the reverend guest from Afghanistan Abdul Sattar Purdely read the message of Chairperson of Academy Of sciences.  The chief guest of the session was Dr. Abdul Malik who addressed the seminar expressing his words as accordance with Gul Khan Nasser’s contributions and forum that launched such enormous programs commemorating the centenary of the everlasting poet. Minister and secretary of culture, tourism, Archives and Sports of Balochistan paid special thanks to both international and national participants of the international Seminar respectably. This outstanding Seminar concluded followed by Mushaira which was hosted by CM. Dr. Abdul Malik Baloch.

Published in The Balochistan Point on December 8, 2014

2014-12-09
Editor
Previous: Protests Continue Against Assassination Of Educator In Gwadar
Next: Nepotism In Balochistan