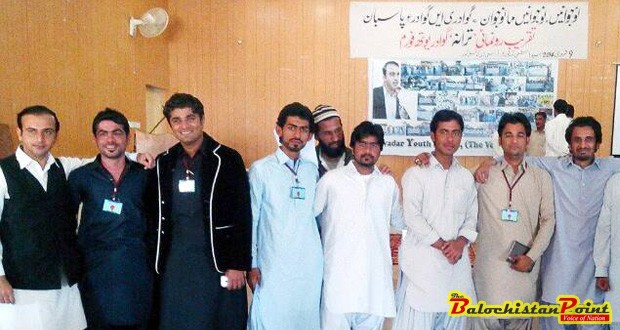 Gwadar – Gwadar Youth Forum (GYF) held a conference on Friday against the illegal selection of student representatives by the Municipal Committee Gwadar.

It is to be noted that on 3rd of April, Municipal Committee in Gwadar released a notification that declared two students named Junaid and Faisal the student representatives for the local government in Gwadar while no student or any youth organization had the knowledge of the secret selection. Since parents of the both selected students belong to ruling political parties; National Party and JUI, it was easy for them to get selected.

Students in Gwadar demanded cancelation of the illegal notification and condemned the administration of Municipal Committee.

“Chairman of Municipal Committee had executed an undemocratic act by selecting the representatives on political basis and favoritism instead of letting the student elect their representative themselves,” said the participants.

“No one can force us to accept unlawful decisions. Students have elected their representatives themselves for 24 years but this time we have been deprived of our right to vote. The released notification is considered temporary by the municipal committee but an unlawful act can’t be tolerated for a second,” They said.

At the end of the conference, students presented tributes to the struggle of GYF for bringing forward the issues of Gwadar youth. The Youth decided to meet the responsible administrators on 13 of April.

Participants of the conference said that if the notification is not cancelled even after the meeting, they would protest vehemently against the unlawful decision of the local government.

Published in The Balochistan Point on April 13, 2015

Gwadar Nepotism 2015-04-13
Editor
Previous: Educational Emergency Is A Mere Publicity Campaign: BSO
Next: Letter: No Change In Plight Of Balochistan