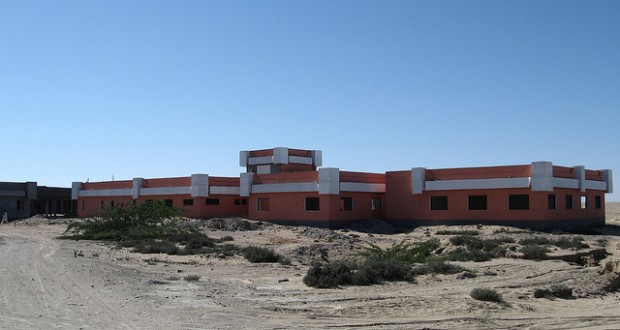 “Stepping to the bus and crossing by the barren arid sandy roadsides of my homeland, a silence of the regime I hear and by the time I reach to my college, a squandering of my talents I experience sometimes. An outrageous state of my college truly anguishes me each day. I have some aims and dreams. May be similar to the college students from developed cities or countries but I don’t ever have any clue if I will be able to achieve what I dream for. However, an intense hope drags me to college each day.” states a girl from Syed Zahoor Shah Hashmi Degree College, Gwadar.

“Sitting under the cracked ceiling of my classroom, a startling fear I feel. Missing the school days lonely, I sit in my class or sit in the corridor with friends one or two, waiting for a teacher to teach me, but what I hear is that we don’t have the particular subject’s teacher in this college or may be never ever the college had one related to it. What I worry about is my future because I too have a vision. Yes, I am a Baloch college student from Gwadar and I am aware of my destiny, but am lost in the path I assume. I ask why I am being kept away from my fundamental right to quality education”shared the Baloch student

Among the people around the world, a conception is common that being a college student means to have lots of knowledge, exciting projects, presentations, assessments, and thrilling experiences along with having a number of responsibilities toward the community and the society as a whole.

This, in reality depends on the institution, the system and the region where an individual is studying. What globally measured are the behaviors and the outcomes from the students through their quality of work, but the quality may differ from place to place. That is the reason, why countless students go out of their town, city or even country in search of quality education but the ones who can’t afford or are unaware of any scholarships remain in the same place, just with the hope that one day everything will change. And of course it will, if the administrators sincerely take some transforming initiatives and approaches for educational development as well as its amplification.

Hence, being a small town with a big name Gwadar is one of the districts in Balochistan that promises great revenue to the country but is still underdeveloped. In fact, Gwadar is the most backward district of Makran as propose of educational development.

Not only the girls face issues regarding education but the boys too are victims of the ground quality of education. However, typically girls are more affected. The boys’ college in the town was established in the early nineteen-nineties but decades after Gwadar doesn’t even have any separate college for girls yet. The classes for girls are held in the boys’ college building in the afternoon.

In addition this situation exemplifies a so-called “Smart Government”. Besides saving a tremendous amount of economy by not spending on education, the new provincial government has been proclaiming, education as one of its top priorities from a year.

“I want to get education, I reverie to be a doctor, teacher, engineer, lawyer, poet and writer, but I ask how can I be all that when I don’t have a single professor in my college. I perceive discrimination. How unjust the system is! Whilst regions at least have a few professors at colleges but we suffer,” Says Bilal Aziz, a student of the college representing the other students through a press report.

It extensively drives the students’ minds that why such apathetic conducts are carried on from such a long time. The students illustrate that a place never gets developed by a deep-sea port, gold mine, natural gas or by its agricultural productions till its revenue is not invested for the development of the that specific region and for its habitants. They define that education is globally meant to be a fundamental right. But it is just something that is said but doesn’t sound like an accurate fact for this particular province.

“The region’s fame is not going to support us, whereas the sustainable development is and it is only possible firstly when investments are carried out for the economic, social, educational and other developmental intensification for the region and secondly when the students are empowered which is only possible when they are given equal opportunities of education as the other provinces are given.” articulates a student from Gwadar College.

Being a college student in a town like Gwadar means to be extremely attentive or else anyone can suffer the loss of skills and undernourishment of knowledge. It means that self-study and volunteer work can be the best ways for educational growth in Gwadar, however it is not an interminable solution though.

The only eight lecturers try their level best to edify the students, besides the fact that it is never possible for eight individual to teach more than 15,00 students. Beginning from 1998, vacancies amplified every year but remain vacant till today. One of the largest libraries of the entire district; the college library is short of librarian from about four years.

The vacant posts, along with being short of ad-ministerial staff and librarian as well as not having girls’ separate college and receiving no attention from the government for roughly ten years now has ended the devotion and passion for education in the hearts of numerous students who travel each day eight kilometers from Gwadar city-center to the college, but still face disillusion. The condition of college in the so-called port city outrages the students therefore a number of students don’t even regularly attend the college.

“We had sent letters to the secretary of the Education Colleges Section Balochistan, Quetta which included a detailed report about the issues of college, in November 2013; however we hadn’t got any response yet”, states the principal of the college.

Youth from Gwadar certainly can build on the immense progress as a prosperous strength in every aspect if they are given equal educational opportunities as the country’s other cities’ students had got. History has always demonstrated the facts of dominant welfare states along with proving education as the input for progressive evolution. Today our education sector deserves serious attention. It is the substantial responsibility of provincial government to initiate efforts and take notice of the issue before it’s too late.

Mariyam Suleman Baloch is blogger and freelance writer. She lives in Gowadar, Baluchistan. Mariyam  studied in US  under the State Department YES Program in 2012.She blogs at http://mariyamanalblog.blogspot.com/

Published in The Balochistan Point on May 22, 2014