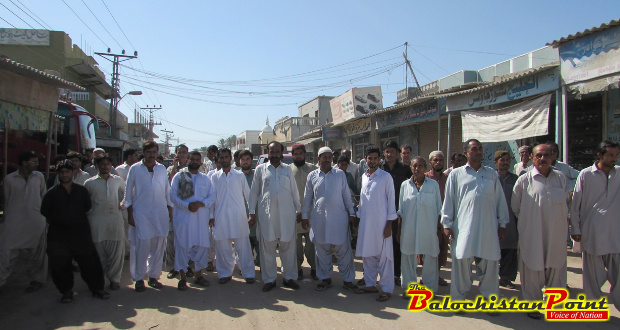 A large number of traders and shopkeepers, whose shops will be affected due to proposed expansion, marched from the center of city to Gwadar Development Authority (GDA) main office to protest against the planned road.

“We welcome developmental projects in our city as far as they don’t affect us, however this time the 70 feet wide road will not only affect the shops, but it will have negative impacts on the economic means of hundreds of families in Gwadar,” a protestor told Balochistan Point.

The Traders Association Gwadar demanded from Government of Balochistan and GDA to decrease the width of the road and in case the shops do get affected, the shopkeepers should be provided an alternative market opposite to the coast guard area.

They warned that if GDA and the Government of Balochistan failed to execute their proposed demands, they will consider it a violation of their economic rights and will raise voice in every forum against the act using their constitutional and legitimate rights.

Published in Balochistan Point on October 19, 2015

Gwadar Protest 2015-10-20
Editor
Previous: Gwadar Center Stage of $46 Billion CPEC is All Set to Run Out of Drinking Water
Next: Gwadar: 20,000 Announced for Degree College