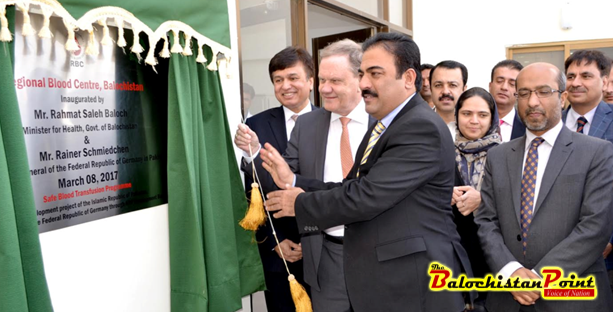 The Quetta Blood Center is one of the 10 Regional Blood Centers developed by the German government as part of the establishment of a nationwide network of 10 modern blood centers and up-gradation of 59 existing hospital based blood banks all over the country in the first phase of the Safe Blood Transfusion Project. The second phase of the Project has now started in which the scope and coverage will be expanded with continued Germen support. In Balochistan, during the Phase II more Blood Centers will be established in Turbat and Loralai in addition to strengthening of the existing private sector blood banks.

Speaking on the occasion the Health Minister expressed his appreciation to the German Government for the gift of a Blood Center to the people of the Balochistan. He also appreciated Germen delegation for especially coming to Quetta for the Inauguration ceremony. He also acknowledged Prof. Zaheer for his leadership and commitment in steering the Blood Project with exemplary zeal and devotion. The Health Minister committed full support for the smooth functioning of the new Center and the implementation of the Blood Programme in the province.

The Germen Counsel General Mr. Rainer Schmiedchen congratulated the Health Minister for his interest in the implementation of the Blood Project in his province as well as for organizing the inauguration of the Quetta RBC. He expressed the hope that this Center will herald a new era of blood safety for the people of Balochistan.

Prof. Zaheer, National Coordinator of the project informed that the Quetta Regional Blood Center will serve as blood procurement and distribution center ensuring quality systems to regulate all activities which involve mobilization and retention of voluntary and regular blood donors, maintenance of donor database, collection of blood donations as well as processing, screening, testing, component preparation and storage of the prepared components. A customized Management Information System has been especially developed by the Programme for the smooth functioning of the new system.

He added that the blood components prepared in this Center would be provided to its linked six hospital blood banks. “These six existing Hospital Blood Banks have been provided new equipment and the blood banks functionally re-modeled and converted into patient oriented hospital transfusion services to perform the function of storage, distribution, compatibility testing and haemovigilance. Other private and NGO sector hospitals of Balochistan will also be provided blood components by this Center.” He added.

The KfW Country Director informed that the Phase I of the project has covered substantial part of the Quetta city. Now in the second phase which has started, coverage will be extended to the Turbat and Loralai also. Therefore on completion of the second phase the majority of Balochistan province will have a modern blood transfusion infrastructure.

In his concluding remarks, Mr. Noor Baloch, Secretary Health thanked the German government for supporting the blood project in Balochistan. He also thanked all the German guests for especially coming to Quetta for the inauguration of the Quetta Blood Center.

The Secretary announced that now all the blood collected in all the blood banks in Quetta will be screened in the new Quetta RBC on the modern screening equipment provided. Prof. Nadeem, Provincial Programme Manager also spoke on the occasion and highlighted the role of the new blood center and the service being provided from it for the benefit of the patients. After the inaugural ceremony the guests visited different sections of the Blood Center and inspected the modern facility.

2017-03-09
admin
Previous: We welcome donor agencies for the uplift of the social sector development in the province, Says Secretary Finance
Next: First technical committee meeting of MICS conducted in Quetta