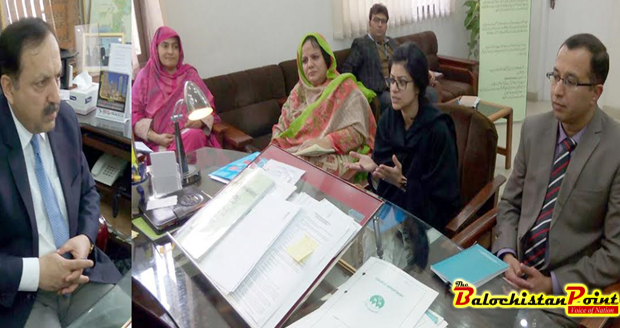 We welcome donor agencies for the uplift of the social sector development in the province, Says Secretary Finance

Quetta: Secretary Finance Mr. Akbar Hussain Durrani has said that government welcomes every pragmatic move taken by the donor agencies for the uplift of the social sector development in the province. He was expressing these views in meeting with the UNDP, Rule of Law Programme Mission headed by, Senior Program Specialist, Ms. Shahzada Ahmed.

He said that government of Balochistan had achieved mile stone progress in provision of basic amenities to the masses, adding that  rule of law had been strengthened because of the joint coordination efforts by the law enforcement agencies and the inline departments.

“Balochistan is safer than before; government of Balochistan urges the international development partners, donor agencies to convene their conferences or seminars at Quetta. And we welcome every pragmatic move taken by the donor agencies for the uplift of the social sector development in the province,” he added.

UNDP, Rule of Law Programme Mission, Senior Program Specialist, Ms. Shahzada Ahmed Said: “UNDP, under the intervention of strengthening rule of law mechanism in Khyber Pakhtunkhwa, has recently partnered with UN Women and UNODC for FATA and Balochistan, with an aim to enhance instructional performance, accountability, criminal justice system and increased citizen demand for reforms. The discussion will pay a vital role in developing an understanding of the gaps with respect of rule of law of law mechanisms in Balochistan.”

Elaborating more she said that; UNDP, UNODC, UN women have the said meeting with the in line departments government of Balochistan to discuss the Rule of Law Project inception phase for six months with the support of DFID. And the two missions have to access the Rule of Law intuitional capacity enhancement needs and also to look forward the findings and further suggestions of all relevant stakeholders in the restive province. As a follow up step, the constitutional will be taking place on 14th March, 2017 at Islamabad.

She further elaborated that this event at Islamabad would be attended by international development partners and government functionaries.

“The objective of the event is to generate resources for the rule of law project in Balochistan. In more, she emphasized that Finance department is the key stakeholder to support UNDP in generating funds and also to play a pragmatic role in allocation of project funding on the footings of KPK government.”  She told.