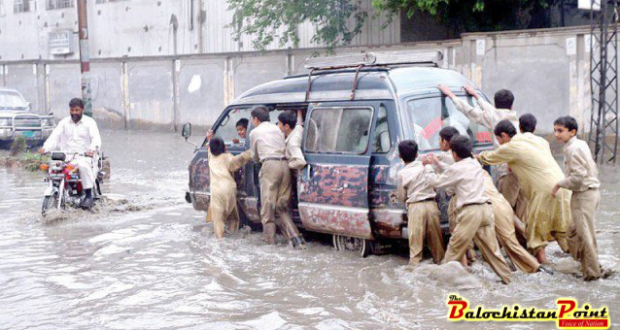 Quetta: Heavy rain coupled with hailstorm lashed major parts of Balochistan including Quetta valley on Friday. The Met office has predicted more rain and cloudy weather during 24 hours in different districts of Balochistan

The damage of several mud houses in Mastung and Dalbandin have been reported. In most of the districts electricity supply was suspended in rain. Pedestrians faced difficulties and vehicles were stuck on the roads when the rain and filthy water accumulated on roads in Quetta city including Prince Road, Double Road, Imadad Road  and Jinnah Road.

The Met Office on Wednesday predicted widespread rains and unusual weather conditions in Balochistan during next 10 days.

According Provincial Disaster Management Authority (PDMA), Control Rooms have also been established at districts levels   to monitor and coordinate the flood relief activities.

People in the areas close prone to flooding have been asked to stay alert and keep informed the Deputy Commissioners (DCs)   PDMAs office.

Published in The Balochistan Point on March 5, 2016

2016-03-05
admin
Previous: There is Dire Need of Medical Colleges in Balochistan: Dr Irshad
Next: Seminar on Opportunities, Issues and Solutions to CPEC held in Karachi